Joe "Exotic" Maldonado-Passage has been transferred from coronavirus isolation to a prison medical centre.

Exotic - who recently became a household name due to the Netflix hit Tiger King - had been placed in coronavirus isolation in a Texas prison when inmates at the jail where he was previously held tested positive for the virus, his husband Dillon Passage said. 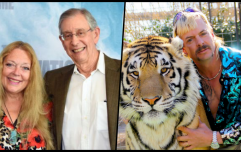 END_OF_DOCUMENT_TOKEN_TO_BE_REPLACED

"We speak like three to five times every day, but since he's been moved to this new facility, they are putting him on a Covid-19 isolation because of the previous jail he was at, there were cases," Passage told US entertainment reporter Andy Cohen.

However, according to The New York Post, Exotic has since been moved to a prison medical centre at another facility.

The former big cat breeder, who ran an exotic animal park in Oklahoma, became an overnight star around the world with the release of the hit Netflix docuseries Tiger King.

Exotic is currently serving a 22-year prison sentence for falsifying wildlife records, violating the Endangered Species Act by killing five tiger cubs and federal charges for his role in a 2017 murder-for-hire plot against his Big Cat Rescue founder and rival Carole Baskin.