Calvin Harris involved in a car accident in Los Angeles

The DJ was treated for a laceration on his face.

Calvin Harris was involved in a car accident on LA on Friday night, although thankfully his injuries were not life threatening.

The Scot, real name Adam Wiles, was forced to cancel a gig at the last minute. 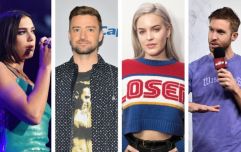 END_OF_DOCUMENT_TOKEN_TO_BE_REPLACED

His team confirmed on his official Facebook page: "Adam's transport was involved in a collision this evening on the way to the airport.

"As a result he will be unable to perform at Omnia tonight. He has been examined by doctors and told to rest for a few days - Calvin HQ."

The star was a passenger in a Cadillac SUV when it smashed into a VW Bug convertible at around 11pm, according to TMZ.

One of the passengers of the smaller car was reportedly ejected from the car, suffering a broken pelvis. The 32-year-old Harris is believed to have left the hospital against the advice of medics.

popular
One of the best movies of the decade has just been added to Netflix
Cristiano Ronaldo 'agrees £173m-a-year deal' with Saudi club
Country singer Jake Flint, 37, dies in his sleep just hours after his wedding
20 years ago, one of the best sci-fi movies of the 21st century was a box-office bomb
U2 drummer Larry Mullen Jr. says band may perform without him in 2023
Katherine Ryan says famous TV star is a ‘predator’ and everyone in industry knows
Surprise frontrunner emerges as potential next James Bond as producers 'love him'
You may also like
4 years ago
Irish Official Charts reveal Ireland's Top 40 songs of the summer
4 years ago
Calvin Harris, Dua Lipa and Deadmau5 lead tributes to Avicii following his death at the age of 28
5 years ago
WATCH: This parrot just played every single track from Calvin Harris' upcoming album
5 years ago
LISTEN: Calvin Harris takes his sound in a new direction with Frank Ocean on 'Slide'
6 years ago
Calvin Harris reveals what it's really like to break up with Taylor Swift
6 years ago
Calvin Harris has used Twitter to have a go at his ex, Taylor Swift
Next Page