Mumford & Sons are making their return to Ireland.

The world's most famous folk band has announced a summer show in Dublin's Malahide Castle to take place on Friday 14 June, this year.

The show will also feature three major support acts, "curated" by the band themselves — including Wild Youth, Dermot Kennedy and Aurora. 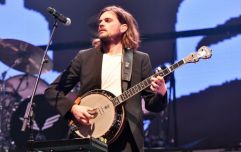 END_OF_DOCUMENT_TOKEN_TO_BE_REPLACED

Irish singer-songwriter Dermot Kennedy will also be joining the band for a major gig in London's Victoria Park on 1 June.

The band is currently touring off the back of their fourth album, Delta, which came out in November of last year... but we're certainly hoping that the lads will be playing a few classics from their first two albums.

Tickets €69.75 including booking fees go on sale Friday 1 March at 9am.

The Big Reviewski || JOE · The Big Reviewski with Y: The Last Man, that Malignant ending & a secret streaming service
popular
Irish pubs and nightclubs could be given 6am closing time after 22 October reopening
Fuel prices set to rise in Budget 2022
Here's the line-up for this week's episode of The Late Late Show
What can you actually do if someone tries to pay you with a bucket of coins?
Marc MacSharry sticks the boot into Micheál Martin on his way out the door
The 50 most iconic songs of all time* have been revealed
Simon Harris is absolutely not having any of these leak accusations
You may also like
2 years ago
Mumford & Sons add extra Irish date due to demand
2 years ago
Mumford & Sons announce Dublin gig in November
4 years ago
WATCH: Hozier joined Mumford and Sons to sing a Beatles classic and round off Longitude with a bang
5 years ago
PIC: The clampers had a field day outside the Mumford and Sons gig at the 3 Arena
6 years ago
Mumford and Sons add extra Dublin date and tickets are on sale this afternoon
6 years ago
Mumford and Sons announce Irish show for late 2015
Next Page