Nicki Minaj's 2018 has been fairly hectic.

Music aside, she has had an ongoing beef with female rapper Cardi B. 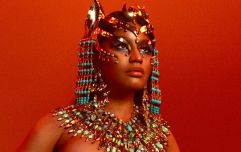 END_OF_DOCUMENT_TOKEN_TO_BE_REPLACED

The two had constantly been taking subtle shots at each other in their lyrics, and this rivalry came to the forefront at during New York Fashion Week a few weeks ago, which resulted in Cardi B launching a shoe at Nicki's head.

But from a music point of view, Nicki's album 'Queen' that came out in August has been a success, placing highly on the billboard charts.

One song that wasn't included on Queen was 'Sorry', and it looks to have landed her in quite a bit of trouble.

According to BBC, Minaj has been sued by 'Fast Car' singer Tracy Chapman for copyright infringement, relating to the song 'Sorry', which Chapman alleges incorporates the lyrics and vocal melody from her song 'Baby, Can I Hold You' without permission.

The lawsuit claims Nicki, real name Onika Tanya Maraj, tried several times to get permission to use the sample after she'd already recorded her song using it.

She has not yet responded to the suit.

The Big Reviewski || JOE · Emile Hirsch on Tarantino, a Speed Racer sequel, and new Irish horror Son
popular
The 50 most iconic songs of all time* have been revealed
Eoghan McDermott to leave RTÉ after six years (Report)
QUIZ: Can you answer all the £1 million questions from Who Wants to be a Millionaire?
People think they've figured out the ranking of the viewers on your Instagram Stories
Someone in Ireland is €500,000 richer following Tuesday's EuroMillions draw
PICS: The man with the biggest penis in the world has one unbelievable problem with it
EA Sports bans Irish FIFA player who racially abused Ian Wright for life
You may also like
1 year ago
Tonight's Nicki Minaj concert in Dublin has been cancelled
2 years ago
Camila Cabello was the biggest winner of this year's MTV EMAs
2 years ago
Cardi B and Nicki Minaj got into a very heated fight at an award ceremony
2 years ago
One of the lyrics on Nicki Minaj's new album has everyone Google-ing it to find out what it means
2 years ago
WATCH: Saturday Night Live shared all the jokes that were too offensive to show on TV
1 month ago
The JOE Music Quiz: Week 40
Next Page