Pic: Yes that’s Bruce Springsteen in a Kilkenny jersey in a brilliant sign outside Nowlan Park

It seems inevitable that Bruce Springsteen will wield a hurley in Kilkenny this weekend, but until that happens, they’ve got the next best thing outside Nowlan Park.

Even when a bona-fide international superstar like Bruce Springsteen turns up in the city, Kilkenny people can’t seem to get hurling off their minds and the GAA have helped fans wanting to see their beloved Cats and Bruce on Sunday by scheduling the All-Ireland quarter-final with Cork for 2pm in Thurles.

The Boss himself was captured signing autographs for star-struck fans outside the K-Bowl Bowling Alley in the Marble City last night and while he wasn’t outside Nowlan Park in person this afternoon, he was there in spirit in the shape of this very impressive sign outside the home of hurling in the county. 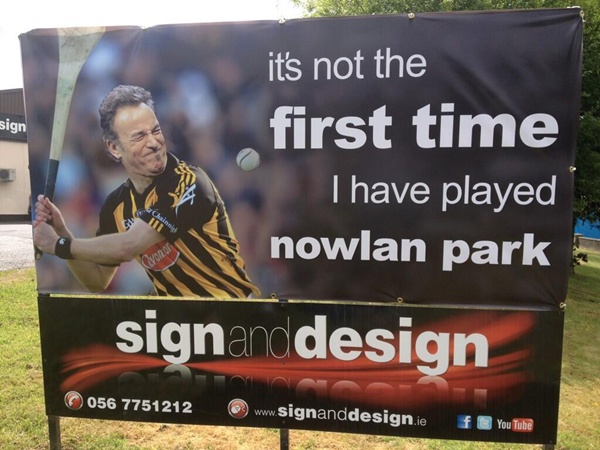 END_OF_DOCUMENT_TOKEN_TO_BE_REPLACED

We haven't seen Bruce's hurling chops so we don't know what position he'd play if he were to dabble in the small ball game but we'd suggest wing-back or midfield.

Why? Well, as he's said himself, the man was born to run.  *JOE goes to get coat*

popular
Taoiseach Micheál Martin says hotels across Ireland could reopen by June
Steven Avery's lawyer says nephew Bobby Dassey planted evidence in case
US to pause use of Johnson & Johnson Covid-19 vaccine "out of an abundance of caution"
Beware of the very clever WhatsApp hack that is locking Irish users out of their accounts
The 50 most iconic songs of all time* have been revealed
Six-time Oscar-nominated drama Sound Of Metal is available to watch at home right now
The JOE Friday Pub Quiz: Week 238
You may also like
2 days ago
JOE’s Song Of The Day #891 – Tiz McNamara ‘April Fool’
3 days ago
The JOE Music Quiz: Week 52
1 week ago
JOE’s Song Of The Day #890 – Lemonade Shoelace 'Autopilot Paradise'
1 week ago
The JOE Music Quiz: Week 51
2 weeks ago
JOE’s Song Of The Day #889 – The Clockworks 'Feels So Real'
2 weeks ago
The JOE Music Quiz: Week 50
Next Page