WATCH: Niall Horan pranks a Niall Horan impersonator live on radio… and does a damn good job of it

For a man from Mullingar, he can sure pull off a good London accent.

One Direction’s decision to go ‘on hiatus’ is still a difficult topic to come to terms with for many of the band’s legions of fans, but the individual members of the band are still doing a good job of putting themselves out there these days.

Mullingar’s own Niall Horan has been busy promoting the release of his new single, ‘Slow Hands’ this week and in an appearance on Nick Grimshaw’s show on BBC Radio One, he served a reminder that he’s well up for a laugh when the opportunity presents itself. 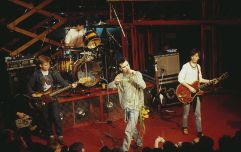 END_OF_DOCUMENT_TOKEN_TO_BE_REPLACED

On live radio, Niall was challenged by Nick to put a call into a Niall Horan impersonator called Liam pretending that he was a potential client looking to book him for a birthday gig in London on June 3.

Assuming the persona of a Londoner named Dave, Niall, with a fairly textbook London accent, played Liam along for a number of minutes, eventually getting him to sing a few lines from his first song, ‘This Town’ before revealing his true identity to the shocked recipient on the other end of the line.

Give yourself a little over five minutes to give this a watch; despite the impersonator not giving him much to go on at times, Niall plays an absolute blinder here.

The Big Reviewski || JOE · Cartoon Saloon's Tomm Moore & Ross Stewart on their incredible new film Wolfwalkers
popular
What the hell is 'Stomp and Holler', and why does Spotify insist that you love it?
The 50 most iconic songs of all time* have been revealed
Weather advisory issued for all of Ireland, with snow on the cards
The JOE Movie Quiz: Week 80
We're sorry, but a new clip from Wild Mountain Thyme is on the loose
18 new Covid-19 deaths confirmed, 269 new cases
WATCH: This episode of Tellytubbies was so creepy it was banned from TV
You may also like
3 days ago
JOE’s Song Of The Day #876 – Ross Breen ‘Some Other Time, Maybe’
4 days ago
Kendrick Lamar amongst first round of headliners announced for Longitude 2021
1 week ago
JOE’s Song Of The Day #875 – Dan Elliott ‘I Only Miss You When I'm Breathing’
1 week ago
The JOE Music Quiz: Week 34
2 weeks ago
JOE’s Song Of The Day #874 – Rowan ‘I Had A Dream’
2 weeks ago
The JOE Music Quiz: Week 33
Next Page