The majority of EU countries are currently classified as being in a red zone.

The European Union is set to introduce ‘dark red’ travel zones, where stricter travel restrictions would apply in member states where Covid-19 is circulating at a very high level.

Speaking at a news conference following a meeting of EU leaders on Thursday, European Commission President Ursula von der Leyen flagged the move, which would likely require people travelling from those zones to take a Covid-19 test before departure and quarantine upon their arrival in another country.

END_OF_DOCUMENT_TOKEN_TO_BE_REPLACED

“A dark red zone would show that in this zone, the virus is circulating at a very high level,” she said.

“Persons travelling from dark red areas could be required to do a test before departure, as well as to undergo quarantine after arrival.”

Von der Leyen added that while non-essential travel was “strongly discouraged” in any event given the deteriorating Covid-19 situation in a number of countries and the presence of new variants of the virus, she acknowledged that access had to be provided for the movement of essential workers and the transport of goods.

The EU introduced a ‘traffic light’ travel system last year to determine the member states deemed safe to travel to based on information relating to the impact of Covid-19 across the continent.

The system is based on a common map with colour codes based on common criteria produced by the European Centre for Disease Control (ECDC), with epidemiological data provided by each member state.

Currently, the vast majority of countries, including Ireland, are categorised as a red zone, which applies to countries where there have been 4% or more positive tests in the previous week or 50 or more cases in 100,000 people. 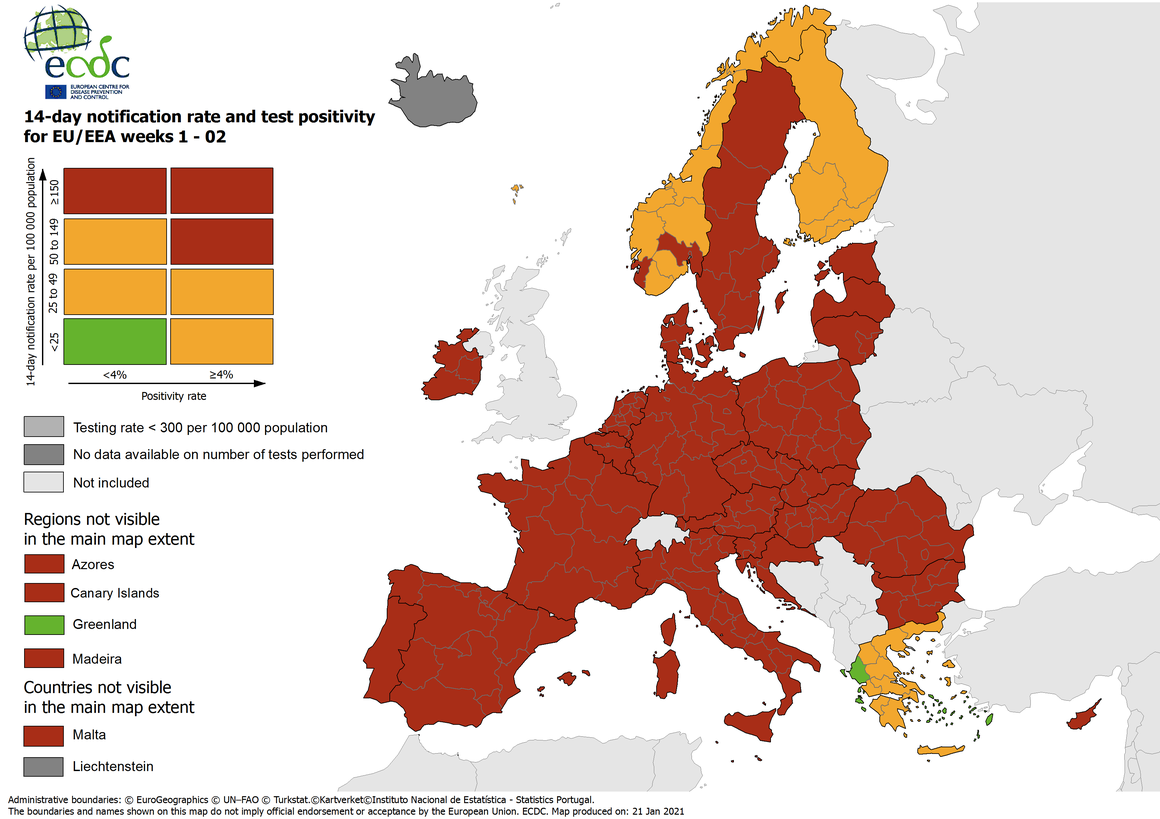 House of Rugby Ireland · Ireland's feel-good win, Casey's initiation song, scrapping Sexton and Scott Williams interview
popular
Impact of vaccination on healthcare workers "phenomenal"
Eoghan McDermott to leave RTÉ after six years (Report)
Varadkar felt "very bad" for missing Irish reopening dates
QUIZ: Can you answer all the £1 million questions from Who Wants to be a Millionaire?
Someone in Ireland is €500,000 richer following Tuesday's EuroMillions draw
BBC reveals Season 6 of Line of Duty is coming later this month
Sony are giving away a free game to all PS4 and PS5 owners
You may also like
19 hours ago
25 more people with Covid-19 have died in Ireland, 566 new cases
20 hours ago
NUIG students told to write 2,000 word essay for breaching Covid rules
22 hours ago
€17,500 worth of cocaine found at street party in Limerick
23 hours ago
Fertility clinic sees huge increase in women freezing eggs since Covid-19
1 day ago
Biden says US to have enough vaccines for the whole country by May
1 day ago
Dolly Parton sings 'Jolene' remix before getting vaccinated with jab she helped fund
Next Page