Not to sound like we're about to start complaining about "kids these days", but back in our day, Halloween used to be cold.

It is, after all, the end of October, we're heading into the depths of winter, and your costume would need to take into consideration the inevitably bad weather that would accompany that time of year.

END_OF_DOCUMENT_TOKEN_TO_BE_REPLACED

Not so much this year, however.

As we're sure you've already noticed, the temperatures throughout October have already felt very much above average for this time of year, with the mid-to-high teens feeling like we're in mid-May.

According to the folks at Met Eireann, while it is dipping a bit this weekend, the temperatures will actually start to climb again early next week.

The evenings will see things dip to as low as 5 degrees, but during the day, particularly on Sunday, it will climb to 15 degrees. 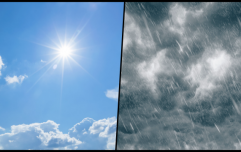 END_OF_DOCUMENT_TOKEN_TO_BE_REPLACED

However, following that, they'll continue to climb ever higher, getting as high as 17 degrees on Tuesday.

Admittedly, these high temperatures are all accompanied by lots of lots of rain pretty much every single day, so your primary concern is not to keep warm, but to keep dry.

Beyond Tuesday, Met Eireann states that "Current indications suggest that it will remain quite mild with spells of rain turning heavy at times."

So there you have it. A kinda warm but maybe very rainy Halloween. Spooky!

popular
The JOE Music Quiz: Week 105
QUIZ: Can you name every county in Ireland containing the letter 'O'?
Three people injured after two-car crash in Dublin
Late Late Viewers left in awe of Paul McGrath's memories of Jack Charlton
The JOE Friday Pub Quiz: Week 295
Morgan Freeman has been banned from entering Russia
QUIZ: Get ready for a tricky time with this General Knowledge Quiz
You may also like
2 weeks ago
No, we're not getting a heatwave just yet, says Met Éireann
3 weeks ago
Met Éireann forecasts massive swing in temperature this week
4 weeks ago
Forecaster warns of "unusually" cold Irish weather change in next few weeks
1 month ago
Met Éireann forecasts snow as temperatures set to plummet
1 month ago
Wintry showers, freezing temperatures and possible snow en route this week
2 months ago
Dublin City Council launching alert system to share warnings with residents
Next Page