It's not an easy time for students at the minute.

Student accommodation has become a serious issue as of late.

Recently we've seen President of Maynooth Student Union removing adverts for accommodation which he felt were too expensive, as well as Irish students being urged to stay safe when signing contracts.

END_OF_DOCUMENT_TOKEN_TO_BE_REPLACED

This news comes after one student accommodation in Galway has been advertised for €250 per week.

Aaron Burke, the President of GMIT Students' Union spoke on the matter, saying: "Students are not cash cows and this can bring extreme pressure on both parents and students, especially when people are struggling to stay in college. The rate of the grant has not increased since 2012 yet rental prices have increased year on year for six years straight. This kind of accommodation far exceeds the already high rental prices that exist in the city."

Megan Reilly, the President of NUIG Students' Union, added: "We cannot stand by these luxury student accommodation providers taking advantage of the current crisis. At this rate, people could be paying up to €1,250 a month for one room in one apartment; some people wouldn’t even pay that on their mortgage monthly. 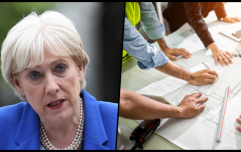 36 vacant properties nationwide to be re-developed into community hubs

END_OF_DOCUMENT_TOKEN_TO_BE_REPLACED

"At the other end of the spectrum we have students who are living in hostels or commuting hours to go to college because they can’t afford to live in Galway.’ Both Unions, together with the One Galway Movement, are planning a Crisis Campout in Eyre Square on Tuesday the 11th of September to shed light on the need for purpose built student housing and social housing in general."

popular
People want "offensive" Crown Paints advert banned after attracting hundreds of complaints
Arrest made after shop robbed at knifepoint in Dublin
Here's how to make €9-11 on Revolut in just a few minutes
QUIZ: Can you identify the famous song from the opening line?
New car-free town with population of 85,000 set to be built in Dublin
Man arrested on suspicion of the murder of Irish man in London
QUIZ: Can you name all the countries beginning with A?
You may also like
1 month ago
Taoiseach condemns "disturbing" fight at Galway v Armagh game
2 months ago
Drogheda and Galway inner city named as worst places in Ireland for litter
2 months ago
Woman in her 80s dies after falling from building in Galway
2 months ago
Galway named one of the top 10 best European cities to raise a family
2 months ago
Met Éireann issue warning for potato blight this week
3 months ago
NUI Galway temporarily restricts services following cyberattack
Next Page