The former world heavyweight champion was caught on video attacking a passenger on a plane.

The man 'attacked' by Mike Tyson on a plane earlier this week has denied that he threw a bottle of water at the former world heavyweight champion.

Footage recorded showed the 55-year-old repeatedly punching a passenger on a flight which was set to take off from San Francisco.

Witnesses on the flight said that Tyson appeared to be friendly and pose for photos at first, however, the former boxer lost his cool after a passenger behind him continued to speak to him.

Tyson and his team have responded to the footage and claimed that the man was "extremely intoxicated" and provoked Tyson, leading to the attack. 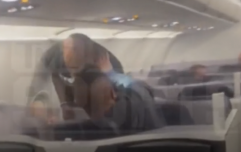 END_OF_DOCUMENT_TOKEN_TO_BE_REPLACED

Tyson's representatives also claimed that the former world champion had a water bottle thrown at him in the build-up to the altercation.

Police from San Francisco also confirmed that they were called to the scene and detained two people that were involved in the incident on the plane.

They also confirmed that one of the people involved, who was also treated for minor injuries, had "provided minimal details of the incident and refused to cooperate further with the police investigation".

However, the 'victim' has since denied that he 'harassed' the former boxer or threw a bottle of water at him.

A statement from the lawyers of 'victim' Melvin Townsend III told TMZ; "Our client is a big Mike Tyson fan.

"When Mike Tyson boarded the plane, he became overly excited.

"At first, their interaction was cordial.

"At a certain point, Mr. Tyson clearly became agitated by an overly excited fan and began to strike him in an excessive manner.

"This situation could have been avoided simply by contacting the flight attendant.

"Our client denies throwing a water bottle prior to being struck by Mr. Tyson.

"To state the obvious, as one of the greatest fighters of all time, Mr. Tyson should have exercised greater restraint before using his hands on an overly excited fan."

TMZ were also told by a source close to the 'victim' that Townsend "is still in shock and has not made a determination on what his next steps will be.

"He hired counsel due to his physical injuries, the overwhelming nature of this event and the associated media inquiries."

It remains unclear if Tyson will face legal action from his fellow passenger following the altercation on the plane.

popular
Bus Éireann’s service from Dublin to London will restart this week
A star-studded crime thriller is among the movies on TV tonight
Gardaí unveil new Armed Support Unit vehicles to replace older models
Gardaí are going global with new roles created in UAE and Bangkok
The full list of cancelled flights in and out of Dublin Airport on Monday (so far)
Amazon Prime Video has just added 51 big movies to its library
An action-packed thriller is among the movies on TV tonight
You may also like
2 months ago
Katie Taylor describes defeating Serrano as the "best moment" of her career
10 months ago
Round up of the best tweets as Irish people all over the world celebrate Kellie Harrington's Olympic win
1 year ago
Brawl erupts between Floyd Mayweather and Jake Paul at press conference
1 year ago
Kate Abdo steals the show at Garcia-Campbell with bizarre compliment
1 year ago
Eddie Hearn heaps praise on Katie Taylor, calling her "the role model"
3 days ago
Woman seriously injured following collision in Kerry
Next Page