An interesting take from the Kerryman.

Just one day ago, we mocked the world of American politics when the news broke that ex-White House Communications Director Anthony Scaramucci joined the American edition of Celebrity Big Brother.

And as bizarre as that is, we're kind of wishing we kept our mouths shut now. 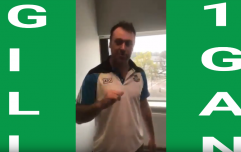 WATCH: 'I'd Vote 4u' is the latest election campaign song from politician Trevor Gilligan

END_OF_DOCUMENT_TOKEN_TO_BE_REPLACED

That's because Danny Healy-Rae, one of Ireland's most high profile politicians, has just had quite a bizarre take on vegans and vegetarians.

In a piece of audio that can be heard on 98FM here, the Kerryman had a bit of a hot take with regards to our veggie-friendly pals.

He said: "Them fellas who are talking about eating meat have never worked hard because if you're a hard worker and do a hard days work, there's nothing to bring you back like a piece of good meat, whether it is bacon and cabbage or whether it is beef or mutton stew."

At this point someone shouted from behind: "Bitta steak every now and then Danny".

He finished this rant by saying: "If you don't have that you won't rise out the following day".

So by the sounds of it, Mr Healy-Rae is quite a big fan of a steak or two. Good to know. We'd like to see him explain his theory in more detail to some famous vegans like Nate Diaz or David Haye though.

popular
Here's how to make €9-11 on Revolut in just a few minutes
Green Party representative calls for a temporary ban of stag and hen parties in Ireland
Pop Idol star Darius Campbell Danesh has died, aged 41
Off-duty Garda arrested in Tipperary on suspicion of drink driving
Murder investigation launched following death of 75-year-old woman in Kerry
QUIZ: You won't be able to correctly guess the meaning of all these words
An stress-inducing music drama is among the movies on TV tonight
You may also like
1 year ago
Arlene Foster steps down as leader of Democratic Unionist Party
1 year ago
Mairead McGuinness confirms that she's interested in replacing Phil Hogan in EU post
1 year ago
Dara Calleary resigns as Minister for Agriculture after attending golf event
3 years ago
Full recount in Ireland South "could cost up to €1 million"
3 years ago
Sinn Féin gain massive support in latest poll, reaching the highest level in two years
3 years ago
QUIZ: Can you name the constituencies all 14 of Ireland's Taoisigh served?
Next Page