VIDEO: What was this fella up to in the background of this TV3 news report earlier today?

Were you watching TV3 earlier?

AND IF SO, can you please explain to what in the name of God he was doing? 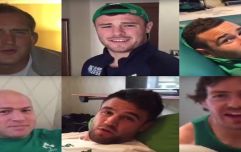 END_OF_DOCUMENT_TOKEN_TO_BE_REPLACED

It doesn't look like he was trying to make any trouble for the TV3 reporter, but at the same time it's very hard to work out why he keeps intermittently throwing his arms to the sky.

One possible solution is that your man is waiting for that giant rugby ball in the background to fall out of the wall it destroyed, safely into his arms.

The Big Reviewski || JOE · Wonder Woman 1984 star Kristen Wiig & director Patty Jenkins on comedy, Cats & handsome Irishmen
popular
QUIZ: Can you name the Marvel Cinematic Universe film from just a single screen shot?
QUIZ: Can you pass your driving test and guess the meaning of all these road signs?
The JOE Movie Quiz: Week 85
The JOE Friday Pub Quiz: Week 226
QUIZ: Can you recognise each of these iconic Dublin pubs?
QUIZ: Can you correctly identify these European country flags?
Recall of Pedigree dog food over safety concerns
You may also like
5 years ago
VIDEO: There's just one iconic Irish moment in this RWC highlights reel
5 years ago
PIC: Two New Zealand stars show their support for Cork school after World Cup Final
5 years ago
After giving away his World Cup medal, Sonny Bill Williams has been given another one
5 years ago
VIDEO: Nigel Owens produced another priceless moment as he warned Dan Carter during RWC Final
5 years ago
Video: Full footage of Sonny Bill Williams rescuing young fan from security and giving him his medal
5 years ago
PICS: Sonny Bill Williams gave away his World Cup medal to young fan in wonderful gesture
Next Page