We all love a good emoji, don't we?

Within the right settings, a well-timed, well-used emoji can be a perfect comedic response in any conversation.

Did you know that there is World Emoji Day? Or that in 2015, the Oxford English Dictionary titled a specific emoji the first to hold the position of “word of the year"? We kid you not. 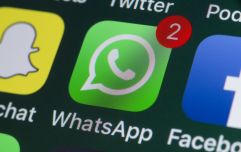 END_OF_DOCUMENT_TOKEN_TO_BE_REPLACED

While we all believe that the word arrived as some kind of play on "emotions" or "emoticons", it actually derives from from Japanese language combination of e (絵, "picture") and moji (文字, "character").

Which makes sense, because not every one of the emojis is an emotion, some of them are that flamenco dancing lady who just loves having a good time.

But which one would you say people use the most?

The winky face one, which causes endless conversations as to whether the person who sent it is being playful or are they flirting?

The cat-holding-its-own-face-in-shock one, because the only way to get across just how shocked you are is to do it as a feline?

Nope, it's this one: 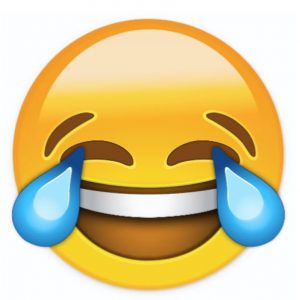 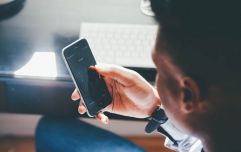 END_OF_DOCUMENT_TOKEN_TO_BE_REPLACED

Yep, the laughing-so-hard-you-start-crying emoji was named by Apple as the most popularly used one (within their testing perimeters of being English-speaking iOS and Mac users in the United States).

Here is the full Top Ten, and you'll see that Tears Of Joy Face is by far the most used one:

We'd ask how you're feeling about the win, but we have a feeling we kinda already know...

The Big Reviewski || JOE · The Big Reviewski with Y: The Last Man, that Malignant ending & a secret streaming service
popular
The JOE Friday Pub Quiz: Week 261
A brilliant Irish psychological thriller and 5 more movies and shows to watch this week
Copper Face Jacks sets reopening date after being closed for 18 months
Employers cannot ask staff to reveal their vaccination status, confirms Government
Miriam O'Callaghan had no patience for Stephen Donnelly's "gibberish" on Prime Time
"Variable speed limits" to be introduced on the M50 in the coming weeks
The 50 most iconic songs of all time* have been revealed
You may also like
3 years ago
A guy lost his phone at Electric Picnic and this clever trick helped him find it
3 years ago
What happens if you ring back a number that's part of a 'Wangiri' phone scam
4 years ago
If you're a man, you can use this phone device to test how strong your sperm is
4 years ago
PIC: Dublin Fire Brigade issue frightening warning to public about overcharging devices
4 years ago
New phone virus can be accidentally downloaded without your knowledge
4 years ago
Amazing news for fans of the legendary Nokia 3310 phone
Next Page