Triona Mullane on taking the lead: "Complain all you want about the boss..."

"It's only when you are the boss that you know what it's all about."

No matter your line of work, it's next to impossible to avoid it. It's part of the job that questions be asked of management, and something of a given that those at the top will be on the receiving end of criticism from employees.

According to Triona Mullane, mAdme Technologies founder and 2019 EY Emerging Entrepreneur of The Year, it's not until you reach the top though that you fully understand what it's like. Speaking to host Sonya Lennon on The Architects of Business fresh after winning her award, Triona went back to when she first realised she wanted to become an entrepreneur.

After BlackBerry's €89 million acquisition of NewBay Software (for whom she worked as CTO) was secured in 2011, she knew it was time for her to make a leap of faith:

"And it was during that time that I would’ve definitely said: ‘Ok, when we exit this, I’m going to do my own thing.’

"I had always been thinking about it and I kind of had felt that it was at that moment in 2011, end of 2011 we had been sold to Blackberry.

It takes no small amount of courage to make the transition from employee to boss. Very rarely is it a straightforward one, and more often than not it feels like you're putting everything on the line.

As Triona said herself, that trip into the unknown is made all the more challenging when you have other opportunities available:

"Frankly that was a little bit of a scary moment as well because I’d plenty of other options.

"That was the ultimate challenge I think for me to say it’s all well and good you can complain all you want about the boss but it’s only when you are the boss that you know what it’s all about." 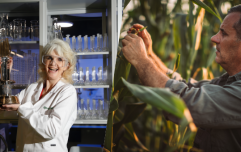 END_OF_DOCUMENT_TOKEN_TO_BE_REPLACED

Now officially part of the esteemed EY Entrepreneur Of The Year alumni, Triona can most certainly count herself among those who know what it's all about. More than 200 million people now use mAdme Technologies on their phones, and none of that would have been possible without a willingness to make that leap of faith.

House of Rugby Ireland · Quinn Roux on finding a home in Ireland and Mike McCarthy brings the absolute HEAT!
popular
Half of arrivals into Ireland this week were returning from holidays, says Taoiseach
Hedge fund requires bailout after Reddit users cause 800% increase in GameStop shares
QUIZ: Can you name all of these countries just from one of their cities?
Marc MacSharry says "if the KKK is selling a vaccine", Ireland should buy it
Scrubs, Family Guy and Grey's Anatomy coming to Disney+
RTÉ Prime Time footage shows tanned Irish holidaymakers returning from Lanzarote
Proud Boys leader has past of working undercover for law enforcement
You may also like
2 hours ago
Try your luck on this week’s €362 million* Mega Millions Super Jackpot for just €2*
1 day ago
First-time buyers in the midlands and Tipperary: This virtual First Time Buyers Masterclass will kickstart your mortgage
1 week ago
New year, new you, new career? This opportunity could be right up your street
2 weeks ago
Over $1 billion can be won from two US lotteries this week and you can enter both draws from Ireland
2 weeks ago
WATCH: New rap video for ‘Dry Ass Pinty’ will provide the kick you need to do Dry January
2 weeks ago
QUIZ: Can you name these smartphones with their logos removed?
Next Page