Want to keep in shape over Christmas? Then try dumbbell cutlery

Hey, fact face! This is one way that you could possibly eat your way to fitness

As any good trainer, dietician or scientician will tell you, diet is going to be a huge part of your regime, whether you want to bulk up and put on some muscle, improve your fitness or get yourself a six pack.

However, when you're wasting all that time eating like a regular human, you could also be working out at the same time and getting the edge on everyone else. You could be that is, if you invest wisely in some dumbbell cutlery. Now, this stuff ain't so cheap at $145 for the set (around €106), but consider it the perfect investment in your future health. 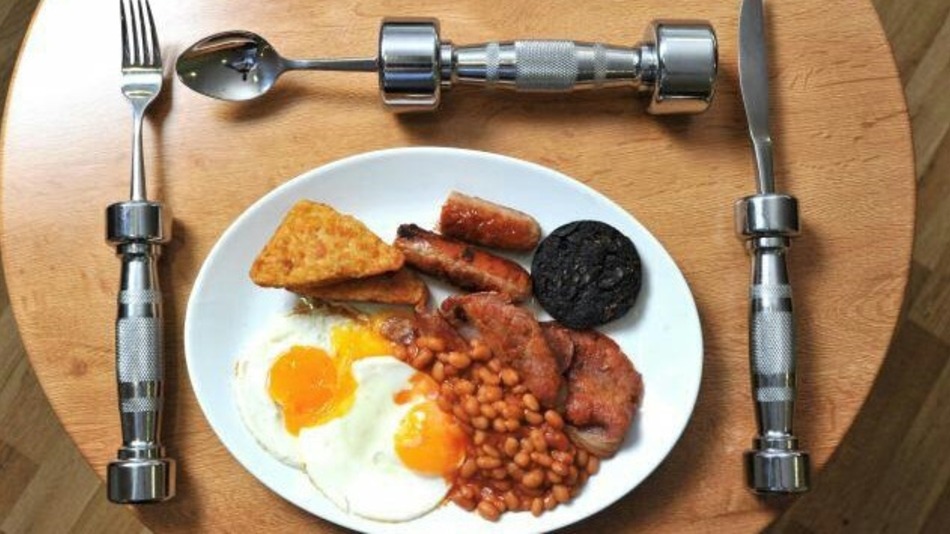 Our serving suggestion is to try quinoa instead of a fry up, but it's your choice

The range, which is called 'Eat Fit Cutlery' includes a fork and knife, both of which weigh 1kg each, and the dessert spoon, which is wisely heavier at 2kg. You can buy them over at TheCheeky.com, but they warn you in advance that the shipping might cost a pretty penny since these are going to weigh a good bit.

While it's a bit late to get these in for the Christmas and give them as a present, it should be the perfect thing to help you keep up with that New Year's resolution to get in better shape.

Hat-tip to Mashable for the picture


popular
Take some time to watch the music video for James Blunt's 'Monsters'
Barry Keoghan has never looked scarier than he does in Calm With Horses
The JOE Movie Quiz: Week 38
QUIZ: Name the missing word from these famous Dumb and Dumber quotes
Heavy snow impacts flight schedule at Knock Airport
Edge makes electrifying return at WWE Royal Rumble
Chinese student who travelled from Wuhan in isolation in Waterford as precautionary measure
You may also like
11 hours ago
Dublin to host a Taco Battle cook-off this February
5 days ago
Eddie Rocket’s are giving away free kids meals this Friday
5 days ago
Here are Ireland’s favourite takeaways, as per the National Takeaway Awards
2 weeks ago
Suspected pool of blood in storage unit amongst reasons for six closure orders on Irish food businesses in December
2 weeks ago
Just Eat have revealed the finalists for this year's National Takeaway Awards
3 weeks ago
Birds Eye confirms that you can cook its waffles in the toaster
Next Page