For Day 20, we're looking back over 2005's all-female cave-diving nightmare, The Descent.

END_OF_DOCUMENT_TOKEN_TO_BE_REPLACED

The greatest weapon that The Descent has on its side is that before things even turn into a horror movie, we can't imagine the situation getting any worse.

When Sarah's (Shauna MacDonald) husband and daughter are killed in a horrific car crash, her friends rally around her in attempt to take her mind off her terrible loss and plan an all-girls holiday. However, instead of hitting the beach or some relaxing spa, they take her on a pretty extreme cave-diving trip in the middle of Nowhere, America.

The six ladies all head into the caves, and for a little while things are going pretty well, until a sudden cave-in cuts off their way back out, and they are forced into exploring an unknown series of underground passages in an attempt to get out.

And, as it turns out, they might not be the only things down there...

Yep, The Descent marries some profound emotional and psychological assaults on the viewer before they even get into the caves with the ladies. 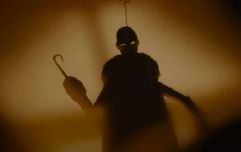 END_OF_DOCUMENT_TOKEN_TO_BE_REPLACED

Once in there, then we're given some of the most intensely claustrophobic scenes you're ever likely to see, and you'll find yourself holding your breath in the sequences were the women are in some of the tighter squeezes, none of them sure that the direction they're heading in will even get them out.

And only THEN do we realise that we're actually in the depths of a monster movie, with the cave-dwelling creatures that turn up being absolutely, nightmare-ishly frightening, and as the women start getting picked off one by one, their survival instincts begin to kick in, and the question of whether these close friends actually have each others backs is up for debate.

Despite being only about an hour and a half long, The Descent feels like it is going on forever, because despite being a terrific horror movie, almost immediately you want it to be over, because the tension is there from the first scene, and literally does not let up even as the end credits have begun.

popular
The JOE Friday Pub Quiz: Week 278
The 10 must-watch new (and old) arrivals coming to Disney+ in February
Covid Restrictions: What can we expect to see today?
One of the best action movies of recent years is finally available to watch at home
Iconic singer and actor Meat Loaf dies aged 74
Here's the line-up for this week's Late Late Show
Hospitality groups insist they're ready and able to reopen fully this weekend
You may also like
10 months ago
WATCH: Hollywood is turning this 6-minute Animal Crossing short horror into a full film
11 months ago
20 of the best scary movies you can watch on Netflix right now
1 year ago
Horror movie starring Elisha Cuthbert to begin shooting in Roscommon next month
1 year ago
A TV series based on the classic horror I Know What You Did Last Summer is coming to Amazon Prime
2 years ago
20 scary movies we're excited to see in 2020
2 years ago
Countdown is a hugely entertaining version of the biggest problem with horror movies
Next Page