A wonderful ending and a reminder of the Good Friday Agreement's importance.

Before the first episode of Derry Girls Season 2 had aired, Lisa McGee insisted that the current season would be more hopeful and optimistic than the first and, after seeing the last two episodes, you know exactly what she meant.

Well, if you need another reason to feel optimistic, Season 3 has officially been confirmed!

END_OF_DOCUMENT_TOKEN_TO_BE_REPLACED

The final shot in the prom episode may have seen our beloved Derry girls wrestling with Jenny Joyce on the tomato sauce-covered stage, but that scene paled in significance to the announcement of the IRA ceasefire - a joyful moment that saw people celebrating in the streets.

One man that was pivotal to the entire peace process is legendary Derryman, John Hume. In fact, Lisa McGee dedicated that particular episode to the Nobel Peace Prize winner.

As we saw in the season finale, Bill Clinton's speech outside the Guildhall may have been the bigger draw - after all, how many times do you get to see a US president on Foyleside? - but Hume was also on the stage during that memorable speech and his work has been a massive influence on the show's creator.

However, the real strength of the episode was making Clinton's visit seem irrelevant when compared to the bigger issue, James' decision to leave Derry. Ultimately, Lisa McGee pulled an absolute winner out of the bag because that finale was absolutely breathtaking.

Before the season finale aired, JOE had the chance to chat with McGee and we had to ask her about the finale, James' dramatic return, and how Season 2 was influenced by John Hume's unshakeable bravery and optimism for a better future.

The dramatic scene between James and Michelle...

END_OF_DOCUMENT_TOKEN_TO_BE_REPLACED

While James has usually been the main focus of the gags, the dramatic heart of the final episode revolved around the arrival of his estranged mam, Kathy. After James made the dramatic decision to return home to London, we finally got to see how Michelle really feels towards her cousin.

“I always wanted to get James to a point where he realised that he was one of the gang and that the way he’s being treated was love. OK, it’s tough love but it’s still love," said McGee.

"Sometimes, Irish people can’t really deal with that sort of emotional situation. Tough love really does mean that you’re one of us. I wanted James to understand that. Also, I wanted to bring Michelle to a point where she had to be vulnerable and ask him to stay. I couldn’t have done that in the first season because I think you have to sort of ‘earn’ that moment. It took a while to get to that point, but I wanted to give them their wee moment".

END_OF_DOCUMENT_TOKEN_TO_BE_REPLACED

"In Season 1, we had Clare and Erin with a dramatic scene in the season finale, but they (James and Michelle) needed a dramatic relationship moment too. I also love the idea of a young boy that’s identifying as a Derry girl because it’s a positive thing. You know, being a Derry girl IS a state of mind. I love how they played that scene, they’re so cute."

Bill Clinton once said that "no one man has done as much recently for the rights of Irish people as he (John Hume) has" and while the US president may have taken the spotlight in the season finale, Hume's legacy defined every single moment in Season 2 of the show.

"John Hume is absolutely such a pivotal figure for Derry and I wanted to - in my own tiny way - capture his spirit and pay tribute to his work," said McGee.

In a typically understated way, the talented writer never wanted to do a flashy, over-sentimental, or preachy tribute to a man that was instrumental in the Good Friday Agreement.

"It was finding a way to do it that didn’t feel heavy-handed. I suppose, the season is a sort of way of thanking him that felt subtle. I’ve always had such huge admiration for John Hume and everything he has done, but when I'm writing Derry Girls, this feeling grew even more. It’s sort of hard to even define what that feeling is - especially now with how the political situation is - and it’s really hard to even define just how great a man he is.

"He sacrificed so much for peace in Ireland and he was the architect for that peace process. It’s something that I’d love everybody to remember, you know, his part in all of this. It was always in the back of my mind when I was writing the scripts," said McGee. 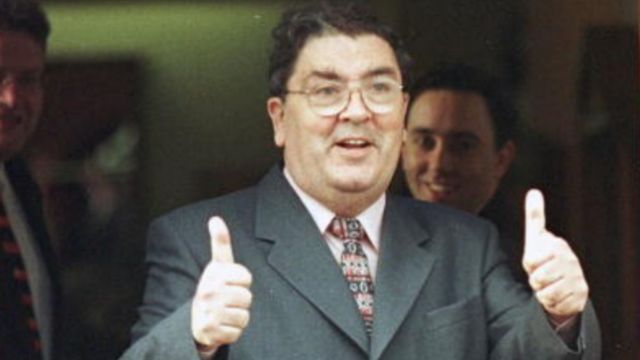 How Derry Girls can remind people about the importance the Good Friday Agreement has...

When Lisa McGee began writing Derry Girls, she had no idea of the uncertain social-political climate that Brexit was fostering. While the show is undoubtedly a comedy - the differences between Protestants and Catholics, Michelle taking a suitcase of vodka to Take That, and the hilarious wake being fine examples of that - the show has always been skilled at handling the more dramatic moments.

Isn't it wonderful that a comedy show has inspired people to read up on The Troubles in an effort to understand a little bit more about Anglo-Irish history?

On this note, McGee is immensely proud that Derry Girls - despite being set in the '90s - has an important contribution to make in the conversations about Brexit and the crucial need to protect the Good Friday Agreement.

“I obviously didn’t know what would be happening when this show went out. I didn’t know that when I was writing it, but I definitely felt that people in parts of Britain either aren’t aware, or they just don’t know how difficult that peace process was to achieve. Maybe they’re forgetting?

"In this season of Derry Girls, I wanted to underline the fact that we did it - we achieved peace in the ‘90s. There was a time when everything went well and we achieved this amazing thing. It was a remarkable time and I wanted to remind people and highlight the fact that this achievement was no small thing. It should never be taken for granted or ignored."

Season 2 of Derry Girls can still be viewed on the All4 player.

popular
The JOE Friday Pub Quiz: Week 220
The JOE Movie Quiz: Week 80
Harry Styles hits back at critics who told him to be more 'manly'
The 50 most iconic songs of all time* have been revealed
Here's Week 58 of JOE's 19 in 90 quickfire quiz
Here are the 6 best movies on TV tonight
The JOE Music Quiz: Week 36
You may also like
5 days ago
Listen carefully, Tubs says he didn't use the F-bomb on live TV... as Toy Show Appeal donations top €6.4million
1 week ago
Two brand new Mrs. Brown’s Boys Christmas specials are coming to your TV this Christmas
1 week ago
Here are the 11 best movies on TV this evening
1 week ago
QUIZ: Can you name all of these characters from The Crown?
2 weeks ago
QUIZ: How well do you remember The Boys v The Girls Trivia Contest on Friends?
2 weeks ago
QUIZ: Match The IT Crowd quote to the character who said it
Next Page