There were some notably starry trailers this week.

Another week, another batch of movie and TV trailers to get excited over.

JOE already covered some of the major teasers to drop over the past seven days in separate articles - including for Ozark season four, Spider-Man: Far From Home and Pam and Tommy.

However, plenty of other major new trailers were released, which JOE has handily compiled for your perusal here.

This sci-fi black comedy centres on two astronomers (Jennifer Lawrence and Leonardo DiCaprio) who discover a planet-killing comet is on a direct collision course with Earth. However, no one really seems to care.

Featuring the acting talents also of Cate Blanchett, Jonah Hill, Mark Rylance, Meryl Streep and Timothée Chalamet - to name just a few - Don't Look Up could have one of the best casts of any film ever made.

The movie will be released in Irish cinemas on 10 December before debuting on Netflix on 24 December.

Meanwhile, its writer-director Adam McKay (Anchorman, Step Brothers) is coming to Dublin on 16 December to receive the Dublin International Film Festival's Volta Award and host a special screening of the movie. 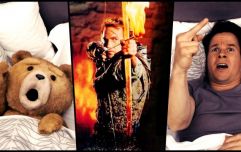 END_OF_DOCUMENT_TOKEN_TO_BE_REPLACED

From visionary director Guillermo Del Toro comes this neo-noir psychological thriller about an ambitious carny (Bradley Cooper) with a talent for manipulating people who hooks up with a female psychiatrist (Cate Blanchett) who is even more dangerous than he is.

Del Toro's last film, The Shape of Water, took home the Best Picture at the Oscars, so you can expect Nightmare Alley will be heavily discussed come the movie awards season.

It's out in Ireland on 21 January.

Through a complex series of circumstances that this trailer spends nearly four minutes trying to explain, a pop star (Jennifer Lopez) winds up marrying a stranger in the crowd at one of her shows (Owen Wilson).

A rom-com featuring two of Hollywood's most charismatic leads, Marry Me is set for a February release in Ireland.

In this animated coming-of-age fantasy-comedy, a 13-year-old girl turns into a giant red panda whenever she gets too excited.

Pixar rarely disappoints and on the basis of this charming and funny trailer, Turning Red should be another fun addition to the studio's catalogue.

Downton Abbey is heading to France in the latest installment of the 20th-century set franchise which will be released in March.

Chloë Grace Moretz is a mother-to-be fighting to survive amid a war between humans and robots.

The sci-fi film does not have an Irish release date as of yet.

That said, it's out in the US on 17 December, so you can expect it sometime after that.

And lastly, Netflix's hit comedy-drama Emily in Paris returns for a second season of adventures and amour on 22 December.

popular
The JOE Movie Quiz: Week 130
UK pub-goers snowed in with Oasis tribute band due to Storm Arwen
The Toy Show DJ brothers have been offered their very first gig
Omicron variant likely already in Ireland, says public health expert
I'm A Celebrity contestants evacuated from set due to Storm Arwen
Amazon Prime Video has quietly added 10 big new movies to its library
QUIZ: Set Yourself Up with this General Knowledge Quiz
You may also like
17 hours ago
Two big new Netflix shows and four more trailers you might have missed this week
21 hours ago
The Toy Show DJ brothers have been offered their very first gig
21 hours ago
A recent Oscar Best Picture winner is among the movies on TV tonight
23 hours ago
The full list of all the new shows and movies coming to Netflix in December
1 day ago
Revolut co-founder donates €100,000 to Late Late Toy Show appeal
1 day ago
Toy Show viewers can't get enough of Finn from last night
Next Page