Anyone who has seen the end of Batman V Superman might be a little ... confused here.

Yep, in the lead up to the release of Justice League, we sat down with Mister Henry Cavill (aka Clark Kent aka Superman) to talk about just how he slots into the new super-hero smack-down, considering... y'know... what happened last time.

Truth be told though, the interview kicks off properly with talk of his lip-accessory. Cavill is currently shooting Mission: Impossible 6 with Tom Cruise, and his character in that has a pretty intense moustache, one that is still present for this interview. Is Cavill prepared to be single-handedly responsible for the return of fashionable moustaches? 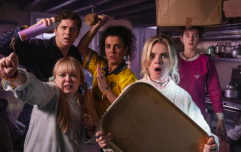 END_OF_DOCUMENT_TOKEN_TO_BE_REPLACED

We also chatted about how difficult it was to keep the movie's twists and turns a secret for the last year, how doing interviews about the movie can't be easy when there's only so much you can say about it, and which super-villain is his favourite from the history of comic books (Hint: he loves A LOT of them).

Check out our Super-chats below:

You can see just how Superman returns (or does he?) and watch the rest of the Justice League fight to save the Earth on the big screen when the movie arrives in Ireland on Friday 17 November.

In case you've been under a rock the last few months, here's the trailer:

popular
One of Liam Neeson's best ever performances is among the movies on TV tonight
Doctor Strange actress Zara Phythian receives 8 years for child sexual abuse
Eurovision producers reveal "irregular voting patterns" during Saturday night's final
The six Eurovision countries with "irregular voting patterns" have been revealed
Irish Rail will no longer provide on-board snack options for foreseeable future
QUIZ: Try out one of our trickiest General Knowledge Quizzes yet
Coleen Rooney calls Rebekah Vardy's leaked texts read in court "pure evil"
You may also like
3 months ago
In conversation with the creators of Horizon: Forbidden West
6 months ago
"My parents took me to a therapist" - Paul Rudd on the movie that has absolutely terrified him
6 months ago
EXCLUSIVE: Paul Rudd reveals his great idea for The 40-Year-Old Virgin sequel
8 months ago
“I actually dropped the phone!” - Irish actress reveals mad moment she got surprise call to star in major Marvel movie
8 months ago
WATCH: The interview between Niall Horan and Lizzo is an absolute flirt-fest
9 months ago
Little Miss Sunshine, one of the best feel-good movies of all time, turns 15 this month
Next Page