A powerful performance on a unique Late Late.

Miriam O'Callaghan made history on Friday night as the first woman to ever host The Late Late Show from start to finish.

It proved to be a fateful night for the country even before she took to the stage, with Taoiseach Leo Varadkar announcing new restrictive measures, effectively amounting to a two-week lockdown. 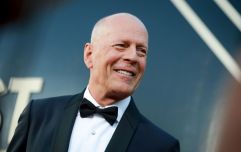 END_OF_DOCUMENT_TOKEN_TO_BE_REPLACED

Varadkar began his address by expressing his condolences for those who have passed away as a result of the Covid-19 coronavirus thus far, confirming the death of a healthcare worker in the process.

Later, in the Late Late Show studio, Miriam O'Callaghan would welcome Hozier, present to issue a plea for people to support the Irish Society for the Prevention of Cruelty to Children.

Introducing his stirring performance of 'The Parting Glass', O'Callaghan noted:

"I'd like to dedicate it to all the people who've lost their lives to this virus but in particular the health worker who died today."

You can watch his performance below.

The Big Reviewski || JOE · Wonder Woman 1984 star Kristen Wiig & director Patty Jenkins on comedy, Cats & handsome Irishmen
popular
The JOE Friday Pub Quiz: Week 226
Recall of Pedigree dog food over safety concerns
QUIZ: Can you correctly identify these European country flags?
QUIZ: Can you pass your driving test and guess the meaning of all these road signs?
QUIZ: Name all the counties of Ireland that contain 3 vowels or more
QUIZ: Can you guess the drink from its can?
QUIZ: Can you name the Marvel Cinematic Universe film from just a single screen shot?
You may also like
1 day ago
Pfizer to temporarily reduce vaccine deliveries to Europe
1 day ago
CMOs in Ireland and Northern Ireland release joint statement over worsening Covid-19 situation
1 day ago
Covid-19 hospital cases continue to rise despite some "hopeful trends"
1 day ago
28 more people with Covid-19 have died, 3,955 new cases
1 day ago
Gardaí fine three people for driving 80km to get a takeaway during Covid restrictions
1 day ago
77,303 Covid-19 vaccines have been administered in Ireland to date
Next Page