We're not quite sure if we're ready for this just yet.

Season 2 of You is due to land on Netflix in almost exactly two weeks, and even though the show is definitely not without its flaws, we'd be lying if we said we weren't a bit excited for it.

We've already gotten a look at the trailer for the new season (which you can see here), but we're getting more information about the series in the form of a new interview with Variety.

And by the sounds of it, it's going to be even darker than the first season, which is going to take some doing.

Showrunner Sera Gamble spoke about the changes being made to the second season, saying: "The first thing we all said to each other when we sat down to work on Season 2 was, ‘We’re never going to replicate the simplicity of the Season 1 story, and we shouldn’t try.’ We shouldn’t try to capture the same feeling. We shouldn’t create the next Beck. We should go into this thinking about how to retain the spirit of Joe’s story but really take the plot in new directions."

And once again, it looks like Joe is going to be completely evil, while still feeling like he's doing the right thing.

Another showrunner Greg Berlanti for the drama spoke about the audiences' odd reaction to the character of Joe, saying: "The fascinating thing was that Joe’s character, given all his … flaws, one could call them, tested higher than any character we’ve ever tested, which is just insane to me" 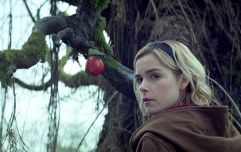 END_OF_DOCUMENT_TOKEN_TO_BE_REPLACED

Interesting, if not a little bit terrifying.

Season 2 of You will be released on 26 December on Netflix.


popular
Take some time to watch the music video for James Blunt's 'Monsters'
The JOE Movie Quiz: Week 38
Barry Keoghan has never looked scarier than he does in Calm With Horses
QUIZ: Name the missing word from these famous Dumb and Dumber quotes
Heavy snow impacts flight schedule at Knock Airport
Chinese student who travelled from Wuhan in isolation in Waterford as precautionary measure
Edge makes electrifying return at WWE Royal Rumble
You may also like
5 days ago
Here are all the new original titles coming to Netflix in February
5 days ago
Haunting of Hill House star says the sequel will be more intense than Season 1
5 days ago
WATCH: Trailer released for CG remake of Pokémon: Mewtwo Strikes Back
1 week ago
Season 5 of Better Call Saul will see the return of two beloved Breaking Bad characters
1 week ago
Penn Badgley on the 'really strange' way they work Joe's voiceovers in while filming You
1 week ago
WATCH: Netflix release powerful trailer for true-life murder mystery Lost Girls
Next Page