"We want them to be attracted to one another".

Love Island has come in for some criticism in the past regarding their lack of body diversity on the show, with every contestant tending to be in peak physical condition.

Audiences were told that this year would include a plus sized contestant, but many viewers are already frustrated at the lack of representation on the series. 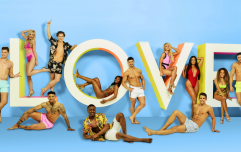 END_OF_DOCUMENT_TOKEN_TO_BE_REPLACED

Each of the contestants on this year's season of the show appear to be fit and toned.

Speaking to Radio Times, creative director Richard Cowles has defended the line-up, claiming that they have been as diverse as possible with their selection process.

"First and foremost, it’s an entertainment show and it’s about people wanting to watch who you’ve got on screen falling in love with one another," he said.

"Yes, we want to be as representative as possible but we also want them to be attracted to one another.

"Also, we’re not saying that everyone that’s in there is how you’re supposed to look. We’re saying here’s a group of people that we want to watch for eight weeks, and we want to watch them fall in love. That’s not at the front of our mind, but we do want to be as diverse as possible."

Love Island is back on our TV screens on Monday, 1 June.

The Big Reviewski || JOE · Emile Hirsch on Tarantino, a Speed Racer sequel, and new Irish horror Son
popular
The 50 most iconic songs of all time* have been revealed
Eoghan McDermott to leave RTÉ after six years (Report)
QUIZ: Can you answer all the £1 million questions from Who Wants to be a Millionaire?
People think they've figured out the ranking of the viewers on your Instagram Stories
Someone in Ireland is €500,000 richer following Tuesday's EuroMillions draw
PICS: The man with the biggest penis in the world has one unbelievable problem with it
EA Sports bans Irish FIFA player who racially abused Ian Wright for life
You may also like
1 year ago
Graphic showing who the most talked about Love Island finalists were during the series proves Ireland was the real MVP
1 year ago
All you need to know about Greg O'Shea - Love Island's latest Irish star
1 year ago
Ofcom will not investigate the 700 complaints made about Maura on Love Island
1 year ago
You’re not better than us because you don’t watch Love Island
1 year ago
Odds for the first night of Love Island don't look good for Irish contestant Yewande Biala
1 year ago
Love Island contestant at the heart of blackface controversy
Next Page