PIC: Only one man turned up at the Spire to celebrate Leonardo DiCaprio’s Oscar win

That’s a hardcore fan right there.

Leonardo DiCaprio finally got his hands on a Best Actor Oscar at the Academy Awards last night and considering how many times he’s come up short in the past, he proved a very popular winner indeed.

As Leo’s Oscar win had an air of inevitability about it, a number of events were planned over the world to celebrate the victory, including a gathering at the Spire in O’Connell Street.

END_OF_DOCUMENT_TOKEN_TO_BE_REPLACED

If the Facebook page is anything to go by, thousands of people have promised to attend the gathering, which was originally planned to take place in the early hours of this morning, but has since been changed to between the hours of 6pm and 9pm this evening.

One fella obviously hadn’t heard about the change in time, however and expressed his disappointment with last night’s turnout on the event's Facebook page... 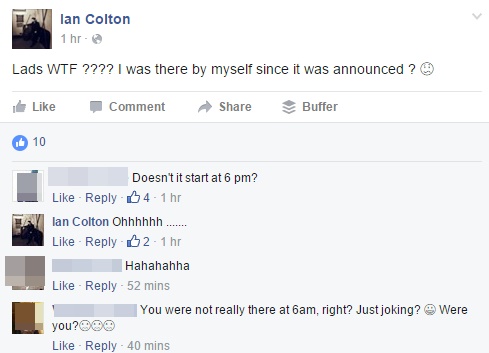 Whoever does turn up at the Spire this evening, let’s make sure Ian gets an extra special welcome.

popular
People want "offensive" Crown Paints advert banned after attracting hundreds of complaints
Here's how to make €9-11 on Revolut in just a few minutes
QUIZ: Can you identify the famous song from the opening line?
New car-free town with population of 85,000 set to be built in Dublin
Man arrested on suspicion of the murder of Irish man in London
The prequel to one of the best twists of all time and 7 more movies & shows to watch this weekend
QUIZ: Can you name all the countries beginning with A?
You may also like
3 days ago
FBI release findings of Rust investigation after shooting of Halyna Hutchins
4 days ago
25 years ago, Sylvester Stallone delivered his best performance in a hard-hitting crime drama
5 days ago
Joker sequel reportedly to cost three times as much as the original
5 days ago
Disney+ has just added 10 big movies to its library
6 days ago
The Sweatiest Movie Quiz Of All Time
1 week ago
The new Love Island and 8 more new movies & shows to watch this weekend
Next Page