Even if it does arrive, it won't be for a good while yet...

At the end of the Rick & Morty's hugely popular and successful second season, we knew that a third season was already on the way, as Adult Swim had already commissioned it.

However, sometime across the airing of the third season, something happened to the show: it almost became TOO popular. END_OF_DOCUMENT_TOKEN_TO_BE_REPLACED

Remember that madness over the szechuan sauce? The show had developed the kind of fanbase that had gone ever so slightly rabid (not terribly unlike what Martin Freeman had to say about Sherlock), and with increased popularity comes rapidly increased demands.

In hindsight, while the third season had some tremendous highlights, the darkness had taken over and the show felt meaner and less funny than before, which is probably why - SPOILERS! - they felt the need to hit the Hard Reboot button by the end of it.

Even with that though, a fourth season has yet to be picked up by Adult Swim and Dan Harmon, one of the show's co-creators, spoke to Kevin Smith on his podcast about it:

"The reason we’re not working on Rick and Morty right now ain’t because I figured out that I don’t need to impress you. It’s because of a little something called contract negotiations and it’s gotten complicated this time around."

He also took to Twitter with a more revealing answer:

As did the show's other co-creator Justin Roiland, who tells fans not to focus their attention on him and Harmon, and instead look to the Turner Broadcasting System (who own the Cartoon Network, and therefore Adult Swim) for an answer:

For everyone telling me to get back to work on Rick and Morty (season four) turn your attention to Turner. I’m waiting around just like you. Making some cool video games in the meantime though! @squanchgames 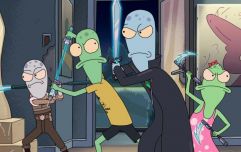 END_OF_DOCUMENT_TOKEN_TO_BE_REPLACED

Somewhere out there, there is a parallel universe in which we are all already enjoying Season 4, but we are not there.

Early estimates for the new season put it at Late 2019, and more information may be revealed during the Turner slate presentation in May, or the Adult Swim festival in October, which is set to feature Run The Jewels, and led to the awesome Rick & Morty-starring music video for 'Oh Mama'.

The Big Reviewski || JOE · The Big Reviewski with Dune, a mini-Hangover reunion & the best of Timothée Chalamet
popular
Report: Crew left Alec Baldwin film set in protest before fatal shooting
Here's the line-up for tonight's episode of The Graham Norton Show
The JOE Music Quiz: Week 78
The JOE Friday Pub Quiz: Week 266
9 of the best horror movies on Netflix right now
QUIZ: Time to get down to business with this General Knowledge Quiz
HBO announces a new Sopranos series is in the works... kind of
You may also like
1 year ago
OFFICIAL: Season 4 of Rick and Morty will be shown on Channel 4
2 years ago
Some beloved characters return in the first full trailer for Season 4 of Rick and Morty
2 years ago
Mike Mendel, long-time producer on The Simpsons, dies at the age of 54
2 years ago
QUIZ: Name the Rick & Morty character (Part 2)
2 years ago
QUIZ: Name the Rick & Morty character (that isn't Rick or Morty)
2 years ago
WATCH: Here's your very first look at Season 4 of Rick and Morty
Next Page