The new superhero comedy movie arrives on Netflix this weekend.

END_OF_DOCUMENT_TOKEN_TO_BE_REPLACED

Life of the Party.

Aside from all being Melissa McCarthy movies and all being very poorly reviewed (38% is the highest Rotten Tomatoes score any of them have achieved), they're also all directed by Ben Falcone, who happens to be Melissa McCarthy's husband.

Also, aside from Superintelligence, they're all written by him, too.

So for Thunder Force, his fifth time directing and fourth time writing, have things improved any? The short is answer is no. The long answer is kind of, but still mostly no.

In a world were some people have superpowers thanks to solar rays arriving on Earth in 1983 and giving natural-born sociopaths superhuman abilities (don't ask questions, the movie doesn't give any answers), we meet a young Emily (eventually Octavia Spencer), who had her parents killed during a supervillain attack. Her parents were on the verge of creating a serum that would give regular humans super abilities to fight back against the bad guys. When they die, Emily dedicates her life to finishing their work.

We also meet a young Lydia (eventually Melissa McCarthy), who protects Emily from bullies, and the two become best friends until Lydia's more-relaxed approach to life eventually gets Emily in trouble and the two go their separate ways. Years later, when Emily doesn't show up to a school reunion, Lydia tracks her down at her new science building HQ in the hopes of burying the hatchet.

END_OF_DOCUMENT_TOKEN_TO_BE_REPLACED

Instead, she accidentally finds herself in the middle of the superpowers injection room, accidentally turns it on and accidentally gets dosed with super strength (again, don't ask). This was originally intended for Emily and with a single dose taking five years to create, she decides to put Lydia through the training programme to defend the Earth, all while dosing herself with the ability of invincibility. 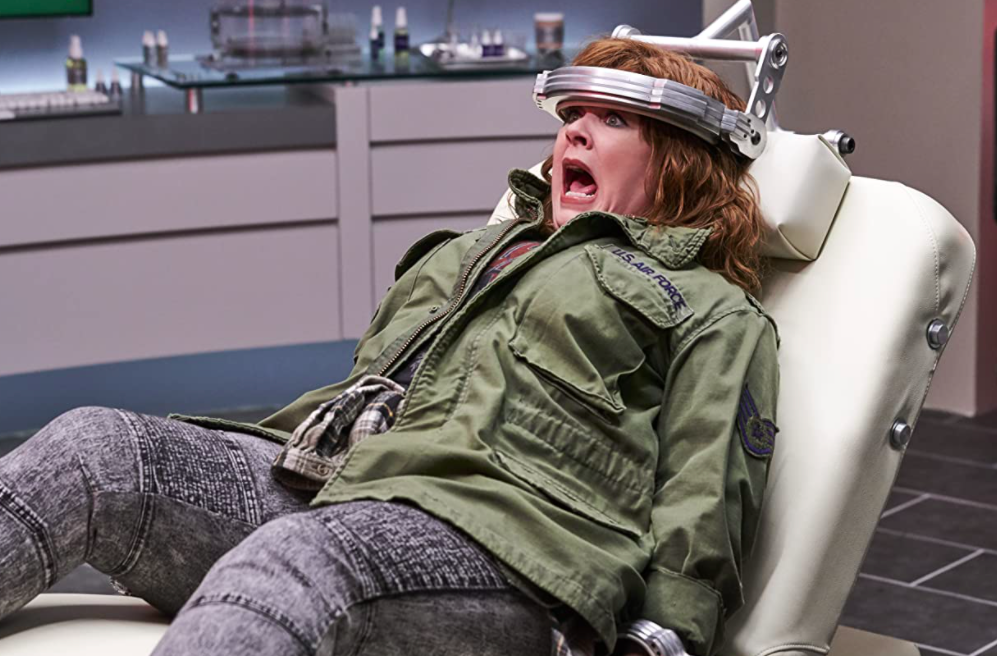 All of this happens so quickly that it barely takes a breath to, y'know, actually make any jokes, aside from McCarthy reacting to not liking needles and a weird running gag about eating raw chicken. Eventually the training is done and we're off to defeat the bad guys, which include Bobby Cannavale as The King, who wants to be Mayor of Chicago so one day he can be President (?), Pom Klementieff as Lazer (guess what her powers are) and Jason Bateman as The Crab... complete with some of the cheapest, most-plastic-looking crab claws in cinema history.

If Falcone were making fun of superhero movies, that could've been a runner. Or even if he wanted to tell a straight ahead superhero story with loads of jokes in it - something that can be done, just look at Deadpool or The Boys - that could've worked, too. Instead, the entire premise seems to be built on "Imagine if Melissa McCarthy had superpowers, wouldn't that be funny?!"

The thing is, after brilliantly funny movies like Spy and properly great performances in movies like Can You Ever Forgive Me?, this lowest common denominator stuff feels far below McCarthy's worth and that is before we get the wasted talents of Oscar-winners Octavia Spencer and Melissa Leo (who appears sporadically as their government handler).

END_OF_DOCUMENT_TOKEN_TO_BE_REPLACED

All of this falls at the feet of Falcone, who does seem to be getting better as a director - some of the action sequences are decent enough - but not getting any better as a writer. Any laughs that do arrive are purely down to McCarthy's immense natural charisma, so perhaps the best course of action for Falcone is to step away from the keyboard and stick purely to behind the camera stuff.

Because McCarthy, and his viewers, deserve better than this.

Thunder Force is released on Netflix from Friday, 9 April.

The Big Reviewski || JOE · The Big Reviewski with Andy Serkis, Squid Game follow-ups & the return of Succession
popular
Gardaí to target four major offences as part of clampdown on Irish roads
New €140 million road officially opens today, replacing one of the Ireland's most dangerous roads
Expert wants 10 antigen tests delivered each week to every family this winter
The cleanest towns in Ireland have been named
An Garda Síochána says it has "thwarted" 75 assassinations since 2016
QUIZ: Can you master this General Knowledge Quiz?
HSE chief Paul Reid: "Time to hit the reset button" as hospitals battle Covid surge
You may also like
1 day ago
The JOE Movie Quiz: Week 124
2 days ago
A modern classic from Quentin Tarantino is among the movies on TV tonight
2 days ago
The new Scream and 5 more big trailers you might have missed this week
3 days ago
Ed Norton's superb debut performance is among the movies on TV tonight
3 days ago
10 classic scary movies you can watch at home right now
3 days ago
The return of Succession and 10 more movies and shows to watch this week
Next Page