Eminem and Dr. Dre might be releasing new music this week

A new Slim Shady and D-R-E collaboration could be on the cards.

According to Illa Da Producer, Eminem's Bodied soundtrack is arriving at the end of this week and rumour has it a new track that features both Eminem and Dr. Dre will be on it.

Having worked with Shady on numerous occasions - most recently on songs 'Offended', 'The Ringer', 'Normal' taken from the rapper's platinum-selling Kamikaze album - Illa teased in an Instagram Live video that we could expect to hear Bodied pretty soon. 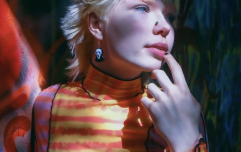 END_OF_DOCUMENT_TOKEN_TO_BE_REPLACED

When asked about what Em's been cooking up, Illa plays coy. "I ain't spilling no beans," he says. "We'll see about that Bodied soundtrack. It's coming out Friday."

Airing the Insta video on October 28th, it would make sense that the Friday he's taking about is November 2nd. "You know if I've got one on there, it's gon' go crazy."

As for Dre's involvement, rumours that Dr Dre would feature on the track have been doing the rounds for a while. Starting when James Larese, the director of Em's 'Lucky You' music video shared a series of posts online that fans think have something to do with a yet-to-be-seen video from the rapper.

END_OF_DOCUMENT_TOKEN_TO_BE_REPLACED

One of the photos shows plans and notes that mention Denaun, aka D12's Mr. Porter, who is rumoured to be featured on a song with Eminem. It also shows the initials 'DD'' which many are speculating stands for Dr. Dre.

The last time Slim Shady and the good doctor traded verses was on "Medicine Man", taken from Dre's 2015 album Compton.

Other Eminem collaborations rumoured to be happening include the rapper teaming up with Anderson .Paak and Shady Records artist Boogie, and then it's being reported that Em could also be working with Dre and 50 Cent, as notes from one post mention a 'three headed monster.'

popular
Netflix has just added an incredibly tense 97-minute thriller
Prime Video has just added 25 very big movies to its library
Stunning Mayo beach named the best place to swim in Ireland and the UK
The Ultimate "That Actor From That Thing" Quiz
WATCH: House of Hammer details the alleged crimes of award-winning actor Armie Hammer
The 50 most iconic songs of all time* have been revealed
People think they've figured out the ranking of the viewers on your Instagram Stories
You may also like
2 years ago
The JOE Music Quiz: Week 4
2 years ago
The worst Eminem lyrics of the past 10 years
2 years ago
Controversial Ariana Grande lyric features on new surprise album from Eminem
2 years ago
Eminem questioned by Secret Service over Trump lyrics
3 years ago
WATCH: Fans have very mixed reaction to Eminem's new 10-minute freestyle 'Kick Off'
3 years ago
A new battle-rap movie created by Eminem is now on YouTube
Next Page