"It’s not a very rock star life, to be honest!" - Sigrid in conversation

The Norwegian superstar on her relationship with Irish fans and how to write the almost perfect pop song.

"I usually just hum a lot and sing silly melodies and then you sing something and it’s like, ‘Okay, okay, good...' but then suddenly there’s this, 'Woaaaaah - that was fucking amazing, don’t know where it came from’ thing."

END_OF_DOCUMENT_TOKEN_TO_BE_REPLACED

There's a little bit more to it, of course, but first, some background.

In the past two-and-a-half years, Sigrid Solbakk Raabe has emerged as one of pop music's brightest lights, one that has established a legitimate affinity with Ireland and its citizens.

The 23-year-old has been over a bunch, graduating from sold-out appointments at venues like the Academy and the Olympia Theatre in the capital to dazzling in both intimate and cavernous surroundings at Electric Picnic.

Throw in a couple of support slots and the recent announcement of headline status at next year's Indiependence festival and the love affair is very real indeed.

Looking back on that hazy Saturday in Stradbally a year ago, it's easy to see why. In the makeshift church setting under the Other Voices banner, she performed for a small, packed-in gathering that threatened to out-sing her, such was the commitment amongst the faithful.

It all proved too much for one besotted soul in the front row who promptly burst into tears during 'Dynamite', prompting Sigrid to meet her at ground level, offering a hug. Hours later atop the Electric Arena stage, she would shed tears of her own in response to the thousands before her, roaring themselves hoarse.

Sitting in a dressing room backstage in Dublin's 3Arena hours before not just her biggest Irish headline appointment yet, but her biggest show anywhere in the world to date, the nerves alluded to by a nearby tour manager barely seem visible. Fanciful, maybe, but perhaps she feels at home here.

Here are the artists on RTÉ 2FM's Rising list for 2022

END_OF_DOCUMENT_TOKEN_TO_BE_REPLACED

Yes, it's often difficult for any celebrity to walk down an Irish street without being asked to gush over how mythical and real their connection is to this place, but with Sigrid it legitimately feels like a tangible thing and a very mutual one at that.

"I honestly don't know what we did in order to get those great crowds here," she considers.

"Obviously I love the songs, there's energetic performance, we love our job, we love what we do, we have fun but there is something electric about the Irish crowds. You guys are incredible. I guess maybe you guys just know how to party.

"You properly go for it. You're not ashamed of singing out loud and dancing and [to] properly let go. That energy feeds off to us onstage. It's just incredible. Is it always like that? Are the Irish crowds always, like, really going for it? I think it is something with the country."

END_OF_DOCUMENT_TOKEN_TO_BE_REPLACED

Back to songwriting. With tracks like 'Strangers', 'Don't Kill My Vibe' and 'High Five' under her belt, it's clear that Sigrid has a knack for sharp hooks. She may not have it down to an exact science just yet, but the focus is ever-present.

"I’m totally fine with being open about the fact that I am a quite calculated writer," she notes.

"That’s up to about 70% or 80%. From 80% to 100% or let’s say 110% when you’ve got a fucking great song, it’s that magic you can’t really explain. I love that me and the people that I work with; we balance in between those two worlds of just seeing what happens and going with what feels naturally good and the more calculated place which is also so well mixed with what’s genuine."

According to Sigrid, always following your gut instinct is hugely important.

"It needs to make me feel something," she nods.

"But a hook, a catchy hook, is based off some calculated thing. You can recognise it. I listen to so much music. I try to gather as much information as possible and then I analyse it. Then I listen and I think, ‘Why is that song so great? Why is it so much better two-and-a-half minutes in than the rest of the song?’ - so I’m calculated that way in that I listen and try to analyse.

"It’s not cynical. Sometimes you think that you walk into a session and it’s like three minutes and, ‘Oh, it’s a hit’ and you have no idea where it came from. I’m not really like that. Sometimes you can’t explain it but for me it’s more those moments where you can’t explain it. It’s always hard writing a good song but there are certain elements that are easier to grasp than that magic moment where you just have no idea where you took it from."

When not writing away - she's staying tight-lipped on what to expect from album number two - Sigrid tends to adopt a fairly normal lifestyle.

The tour bus offers sanctuary. She sticks close to a band that gives off the vibe of a family unit, favouring the low roar of coffee shop chatter over wild post-gig nights out. In between, a mostly chilled-out downtime, the likes of The 1975, Tame Impala and Kacey Musgraves rarely far from earshot.

"It’s not a very rock star life, to be honest!" she laughs.

"Sometimes it is glamorous but most of the time it’s travelling and a lot of waiting. The people that come to our shows and listen to my music, I feel like they are so understanding.

"I remember when… I guess my fans, which is a bit weird to say, were waiting for the album, they were posting saying, ‘We’ve gotta give Sigrid all the time she needs to finish it, we will be here waiting, we’re so excited’ - it was a small thing, but it meant so much to me to see that understanding. It takes time to create something." 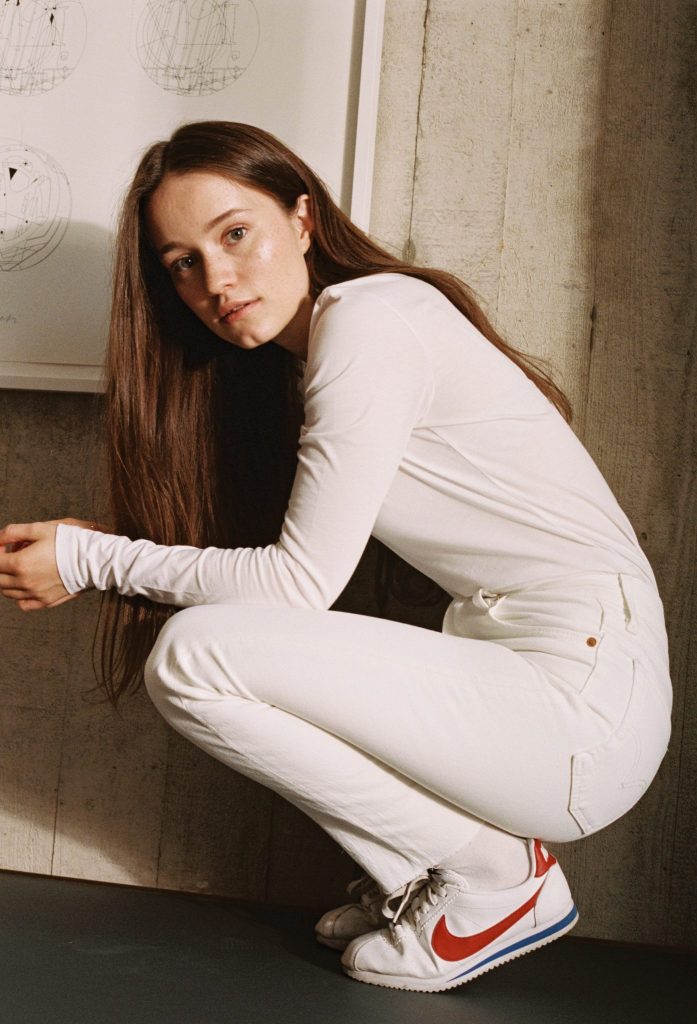 Which brings the whole realm of social media into perspective.

Given that Sigrid is a pop artist with a rising profile, it's not surprising that she has attracted the attention of many a 'stan' - fans with enthusiasm so fervent it arguably borders on unhealthy behaviour, so christened for the infamous Eminem song of the same name - and thus you wonder about her relationship with them.

As indicated above, it seems wholesome enough, very much in-keeping with her overall brand.

"When someone posts a lot then you look at that and then think, ‘Oh, I should also post a lot’ and then it just builds and builds and builds to a thing where people post all the time. I do like social media in some ways. I've got to admit, I love memes. They’re the best.

"There’s one account called Sigrid Memes where this person makes memes out of everything I do, which is great but yeah, sometimes I think social media can be a bit too much. I just log off for a bit. I think that’s healthy for everyone. It’s what everyone says; it’s like a fun place but it can also be quite hard. I’ve been really lucky with the support I get from there."

As for where Sigrid finds herself as she navigates the complex machinery of the music industry, she underlines how proud she is of everyone involved, not least when it comes to taking care of themselves. What's more, she seems to welcome the hustle.

"Of course it’s been very hectic but I’ve always known that I was going to have a job that was more than nine-to-four and go home," she says.

When did she first realise that this was a lifestyle she could get into and that the music would work out?

"Well, I didn’t know until I was in it, to be honest with you. This is 100% my choice that I am in this industry and that I’m doing this, but I had no idea what it was before I was in it.

"I didn’t know every aspect that there is to a career - it’s not only to write the songs and play them, there’s so much in between, so much planning and strategy and emails… just, there’s a lot. But I love it. I feel like I’m good at it and I’m enjoying it and I have a great team."

All of which is later evidenced by that big 3Arena bow.

It's a love-in and, no mistake, the audience deafening after almost every song. Sigrid, a seasoned pro now, drinks it in.

The performance is typically spirited and inviting - her parents are here, too - but something is missing, like watching a festival set or a support slot instead of a full-on arena-sized main event. A low-key production doesn't help, but she powers through with verve. It's the first real shot in anger at a venue of this nature, so fair enough.

Throughout, you witness scores of young girls shepherded by their own parents, some of whom wind up parting with iPhones so the kids aren't left out when it comes time for the crowd to whack the flashlight on and wave it about as one, all directed towards an individual that, whether smiling or crying, stands tall as their hero.

popular
Amazon Prime Video has just added 16 big movies to its library
Prince's team stop Nothing Compares 2 U being used in new Sinead O'Connor doc
13 reasons why an employer can decline your right to remote working under new legislation
Neil Young wants Spotify to remove his music because of Joe Rogan podcast
QUIZ: We bet you can't get full marks in this extremely frustrating geography quiz
UCD students provided with €30 gift voucher after toilets were contaminated with wastewater
8 great new (and classic) additions coming to Prime Video in February
You may also like
4 days ago
Iconic singer and actor Meat Loaf dies aged 74
1 month ago
Ranking all the Christmas number ones of the 2010's
2 months ago
The top 10 'greatest of all time' songs have been revealed
2 months ago
60 years later, a new number one song of all time has been crowned
2 months ago
Travis Scott says he is "absolutely devastated" after eight die at Astroworld festival
2 months ago
At least eight dead and several injured in crush at Travis Scott's Astroworld festival
Next Page