A new Irish talent you need to hear now.

Next up to play JOE and Her.ie's Sunday Sessions is Sorcha Richardson.

The Dubliner, who is based in New York, gained huge momentum in 2015 after the release of her stunning single Petrol Station. 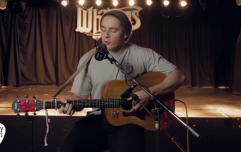 END_OF_DOCUMENT_TOKEN_TO_BE_REPLACED

The electro artist has a debut EP is on the way in 2016 and it's one of the releases we're most excited to hear this year.

Sorcha joined us in Whelan's to record Sunday Sessions, she played the aforementioned Petrol Station and did a gorgeous cover of Latch by Disclosure and Sam Smith.