Bríd and Sandy had quite the wedding.

Aaron Hughes, the lead singer of wedding band Rubix, has got in touch with JOE to give us the full story behind the performance of Ed Sheeran and Snow Patrol at the wedding of Johnny McDaid's sister Bríd last weekend.

Johnny, of course, is the guitarist/pianist with Snow Patrol. 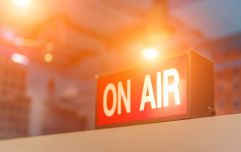 WATCH: This woman's impression of sound engineers in rap studios is absolutely hilarious

END_OF_DOCUMENT_TOKEN_TO_BE_REPLACED

"We were informed that Johnny McDaid & Ed Sheeran would be singing the first dance song," Aaron tells us.

"We got the guys guitars ready and checked and while fixing some cables on the stage got a tap on the back. I turned around and there was Johnny and Ed, after a quick meet and greet we got the lads set up before they asked the bride and groom to the floor for their first dance.

"After which they called the other Snow Patrol lads to the stage to perform Chasing Cars together.

"They needed a bass player and guitar player so our guys joined them for it and a cover of Superstition. Our guys being big fans of both Ed and Snow Patrol were chuffed.

"After that Rubix took over while Ed & Snow Patrol took to the dance floor. I got to drop the line "Special thanks to Ed Sheeran and Snow Patrol for supporting us here today". It was a bizarre and very enjoyable night."

House of Rugby Ireland · Munster can't beat Leinster, Six Nations squad and John Cooney interview
popular
Leo Varadkar says if Ireland introduced mandatory hotel quarantine, it would have to do so for a year
QUIZ: Can you name all of these countries just from one of their cities?
New Zealand set to close its borders for the entirety of 2021
CONFIRMED: Level 5 restrictions to remain in place until 5 March
Man arrested for fishing envelopes out of church collection boxes in Cork
10 absolutely iconic video games that turn 20 years old in 2021
Police called to illegal rave to find pensioners queuing for vaccine
You may also like
1 year ago
Apostrophe Protection Society closes down, claiming "laziness has won"
1 year ago
25 of the funniest tweets you might have missed in October
1 year ago
WATCH: RTÉ raised their game with their Halloween reporting on Thursday
1 year ago
Comedian Josh Pray to stop making Irish-themed videos following online abuse
1 year ago
Four Irish entries in Cosmopolitan's top 30 most swiped Tinder accounts in Ireland and the UK
1 year ago
WATCH: American comedian Josh Pray is back with his reaction to All-Ireland final
Next Page