'Banned' documentary about the Queen temporarily leaked to YouTube

A documentary showing an unguarded looked at the Royal Family has leaked to YouTube, years after it was withdrawn from circulation.

The 1969 film Royal Family is a fly-on-the-wall documentary following the Royals. It features the Queen attending an official audience and garden party, and having lunch with Richard Nixon, as well as much more mundane activities like the Royals having breakfast, watching television and the Queen buying Prince Edward an ice cream.

END_OF_DOCUMENT_TOKEN_TO_BE_REPLACED

It also includes footage of a royal tour of South America, and Princess Anne going to a North Sea oil rig.

According to The Telegraph, The Queen herself is said to have since ordered the film to be made unavailable, meaning it has not officially been seen since 1977.

However, earlier this week it found its way onto YouTube. It was quickly removed, but not before racking up thousands of views. 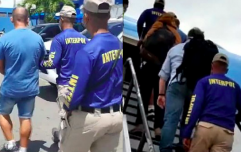 END_OF_DOCUMENT_TOKEN_TO_BE_REPLACED

"This is a matter for the BBC," a Royal source told The Telegraph.

"From time to time, things pop up on the internet that should not be there. We will assume it’s going to be taken down."

The Telegraph also reviewed Royal Family before it was taken down, saying it showed the family as "totally unguarded, [and] natural, non-media trained," adding "the family don't know how they are expected to behave on camera, so they just behave like themselves".

The film was commissioned by Elizabeth II herself to celebrate the investiture of Charles as Prince of Wales.

Royal Family is protected by Crown copyright. Small sections of it have been made available over the years, often in other documentaries such as the BBC's The Duke at 90 in 2011.

popular
Prince George reportedly told classmate "my father will be King so you better watch out"
Jeffrey Dahmer’s dad thinks he knows what’s to blame for son becoming a serial killer
Budget 2023: Cigarettes going up, energy credits announced, child and social welfare increases confirmed
Two new 24-hour bus services are coming to Dublin
QUIZ: Test your knowledge with this Ultimate Friends Character Quiz
An underseen disaster film is among the movies on TV tonight
CONFIRMED: Renters to benefit from €500 tax credit as part of Budget 2023
You may also like
1 month ago
WATCH: The full trailer for Cobra Kai season 5 has landed
2 months ago
Fan remakes Simpsons: Hit and Run as open-world game and it looks amazing
1 year ago
Netflix making The Trial of the Chicago 7 free to watch on YouTube for 48 hours
1 year ago
Here are the Top 10 most-watched music videos in Ireland in 2020
2 years ago
These were the most-watched YouTube videos in Ireland in 2019
3 years ago
A YouTuber family are selling a doll version of their baby son
Next Page