10,253 people in Ireland were officially registered as homeless in May

10,253 people in Ireland, including 3,749 children, were officially registered as homeless during the month of May, according to the latest figures published by the Department of Housing on Friday.

1,700 families in total (adults associated with these families are included in the overall figure) were registered as homeless in the week 20-26 May 2019.

According to the figures, 4,367 adults in Dublin were living in state-funded emergency accommodation last month, with the South-West (552) region accounting for the largest number of homeless people outside of the capital. 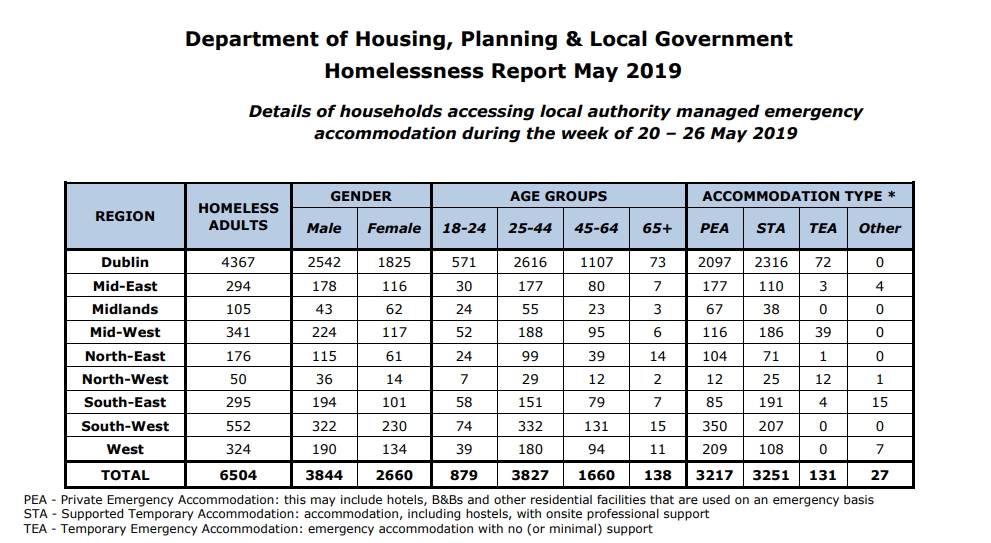 END_OF_DOCUMENT_TOKEN_TO_BE_REPLACED

Minister for Housing, Planning & Local Government Eoghan Murphy has not commented on the figures for May; following the publication of the figures for April, he said: “Family homelessness continues to be very challenging, particularly in the Dublin area.

“So far this year we have exited more than 320 families out of emergency accommodation into a home, which is some progress, but clearly, we need to do a lot more.

“My Department is working closely with the local authorities to deliver homes for every family in emergency accommodation.”


popular
The JOE Friday Pub Quiz: Week 174
Paddy Holohan has been suspended from Sinn Féin with immediate effect
Paddy Holohan has been suspended from Sinn Féin over his claims that "scum" underage girls were having sex with men and blackmailing them
QUIZ: How many of these Disney Channel TV shows can you name?
Leo Varadkar hurries away from questions about "corporations and parasite landlords" on campaign trail
Two people shot in North Dublin
Met Éireann has issued an ice and low temperature warning for 17 counties
You may also like
2 hours ago
Two people shot in North Dublin
3 hours ago
€100,000 worth of suspected cannabis seized in Sligo
4 hours ago
HSE issues warning after a large increase in mumps cases
7 hours ago
A man in his 20s has died following a stabbing in Cork city
1 day ago
A homeless woman in her 20s has died in a Dublin hostel
1 day ago
PICS: Pair of runners worth €550 among Criminal Assets Bureau seizures in Dublin and Kildare
Next Page