Stoke City winger James McClean celebrated his thirtieth birthday on 22 April and not all of the birthday messages were kind.

The Derryman received a vitriolic and disgusting card that was sent to the Potters' training ground in which he's called a "Fenian sub human bastard." 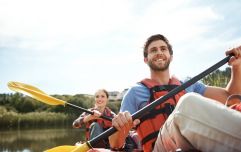 END_OF_DOCUMENT_TOKEN_TO_BE_REPLACED

The message also refers to Bobby Sands as the 1981 "Slimmer of the Year."

Of course, McClean's passionate political beliefs have seen him being targeted for abuse in the past.

Four years ago, the former Wigan Athletic man penned an articulate, informed, and measured explanation about why he'll never wear the poppy.

Sadly, as we saw just five months ago, he's still receiving death threats and vicious packages in the post due to his poppy stance.

As always, it's worth noting that McClean recently paid for six homeless people to have food and shelter. He has also made a 'considerable donation' to help fund a heart transplant for a small child in Derry, helped pay for the funeral of a child who died tragically in a car accident and contributed towards the medical treatment of a baby that spent most of his young life in hospital due to a series of medical problems.

Despite receiving the following message, it appears that the Sunderland winger is refusing to let this hatred intimidate him because he wanted to share the message on social media.

For those of a sensitive disposition, consider this to be a warning.

END_OF_DOCUMENT_TOKEN_TO_BE_REPLACED

The message states: "You are a two faced hypocritical bastard. You don't like this country and we don't like you. It's about time these gutless English managers stood up to you and tell you to get back to shithouse called Derry. So you are fucking Irish international, any body can play for fucking Ireland. They give caps out in cornflake packets and you have to drink that muck called Guinness that qualifys [sic] you.

"They should have put the Waffen SS in Ireland. They would have used scorched earth tactics not like British politicians licking IRA arses. The fucking Irish will do anything for poxy Ireland, except live in that shithole. The Irish are a race of inbred, subhuman parasites breed like maggots. Bloody Sunday. Blood good laugh. 13 nil to us. Ha ha ha ha. Should have been 13,000 of you sub human bastards."

The Big Reviewski || JOE · TBR Spotlight: The Falcon and the Winter Soldier Episode Five - 'Truth'
popular
The 50 most iconic songs of all time* have been revealed
QUIZ: Can you answer all of Sinead and Daniel's questions on the Irish Celebrity Who Wants to be a Millionaire?
PICS: The man with the biggest penis in the world has one unbelievable problem with it
The JOE Music Quiz: Week 53
The JOE Friday Pub Quiz: Week 239
QUIZ: How well do you remember the very first Game of Thrones episode?
The Falcon and the Winter Soldier has the most powerful scene in MCU history
You may also like
4 days ago
David Beckham to front new Disney+ football documentary series
2 weeks ago
Martin Compston reveals moment he delayed Line of Duty filming to watch Scotland penalty shoot-out
3 weeks ago
Olympic surfing hopeful Katherine Diaz dies after being struck by lightning while training
1 month ago
EA Sports bans Irish FIFA player who racially abused Ian Wright for life
1 month ago
TOWIE star Mark Wright is officially the worst player on FIFA 21
2 months ago
Jamie Carragher reacts to hilarious TikTok remix combining on-air yelp with John Legend song
Next Page