It's not looking great.

Looking ahead to this weekend, Ireland's match against Wales in the Six Nations and Birds of Prey (and the Fantabulous Emancipation of One Harley Quinn) being released in cinemas are amongst the things to look forward to, so it's not as if we're going to be bored.

On top of this, there are countless films and TV shows to get stuck into and it's a good thing that there are plenty of indoor distractions because it's shaping up to be pretty miserable on the weather front.

After Met Éireann said there's a possibility of weather warnings being issued this weekend, it appears that Storm Ciara is set to bring some pretty dour conditions, with wet and windy weather expected in the coming days.

Named by the Met Office in the UK, Storm Ciara has already prompted status yellow wind warnings to be put in place for England, Wales, Scotland and Northern Ireland on Saturday and Sunday.

Here's how the weekend is shaping up weather wise.

Friday night is set to be cold, with temperatures falling between 0 to +3 degrees, with frost in places.

After a mostly dry start on Saturday, heavy rain and strong winds are expected to move eastwards over the country, bringing a risk of very strong squally winds, with gales along all coasts. Strong gale force winds along the northwest coast are also expected, with Leinster and Munster set to experience the majority of the rainfall. 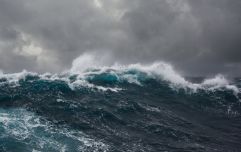 END_OF_DOCUMENT_TOKEN_TO_BE_REPLACED

Sunday's forecast isn't ideal either, with current indications suggesting a "very strong to near gale force and gusty southwest wind" developing alongside some heavy rain as Storm Ciara tracks to the north of the country.

The rain is expected to turn to showers later in the day, with a risk of some hail and thunder at times.

Sunday night is set to be cold, with lows of 0 to 3 degrees. A few showers will occur with some of the showers turning wintry, especially in the west and northwest of the country.

Looking ahead to next week, the weather is set to be unsettled during the early parts of the week, with generally strong winds, stormy conditions and high seas.

Spells of heavy rain are set to be broken up with with cold showery conditions. Some of the showers will turn wintry at times, with hail and thunder also a possibility.

All in all, it's going to be wet and windy, you might want to tailor your plans accordingly.


popular
The JOE Friday Pub Quiz: Week 180
QUIZ: Do you know your dashboard warning signs?
The 50 most iconic songs of all time* have been revealed
QUIZ: Can you name all 14 landlocked counties in Ireland?
QUIZ: Can you guess the pixelated album cover?
People think they've figured out the ranking of the viewers on your Instagram Stories
The most popular baby names in Ireland in 2019 have been revealed
You may also like
14 hours ago
Met Éireann issues status red marine warning ahead of the arrival of Storm Jorge this weekend
2 days ago
Rain, hail, sleet, snow and thunder in store for Ireland this weekend
3 days ago
Met Éireann issues snow/ice warning for three counties
3 days ago
Two separate weather warnings in place as Met Éireann says to expect snow accumulations
4 days ago
Met Éireann issues a snow and ice warning for the whole country
5 days ago
Met Éireann updates rainfall warning, adding Limerick to the mix
Next Page