The Luas strike scheduled for St Patrick's Day has been cancelled

It has caused a huge amount of controversy, but the Luas strike that was scheduled to take place on St Patrick's Day has now been called off.

The Luas strike scheduled to take place tomorrow has been cancelled 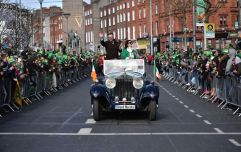 END_OF_DOCUMENT_TOKEN_TO_BE_REPLACED

Discussions between trade union representatives and Transdev - the Luas operator - regarding a number of issues are set to continue, after deals involving the revenue protection officers and revenue supervisors were agreed earlier.

According to RTÉ, Transdev has proposed the following deal to drivers over the next three years; a 2% raise on acceptance of the deal, followed by a further 2% increase on New Year's Day 2017, with the exact same rise offered for the next two years on the very same day; 2% rise on January 1, 2018 and another raise of 2% on the first day of 2019.

Talks will continue and no long-term arrangement has yet to be made between the parties involved.