Video games can be tricky.

In some cases, they make you want to hurl your controller into the sun itself.

Sekiro: Shadows Die Twice, released in March of 2019, is one such game.

If you're unfamiliar, you play as a battle-hardened and very stoic ninja who is blessed/cursed with the ability to resurrect himself.

That's handy, because you will die many, many, many times while playing Sekiro, given that the game comes from the creator of Dark Souls and Bloodborne.

In tandem with its punishing difficulty curve, the satisfaction you feel when you do finally take down bosses and mini-bosses is legitimately incredible.

There's Vin Diesel and Michelle Rodriguez doing the honours below.

.@SekiroTheGame has carved its path to victory at #TheGameAwards! ⚔️ Congratulations @Activision and @FromSoftware_pr on an amazing win for GAME OF THE YEAR! pic.twitter.com/26uZwKn1sH 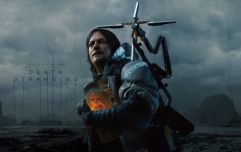 Death Stranding is unique, bonkers, frustrating, and an absolute must-play

END_OF_DOCUMENT_TOKEN_TO_BE_REPLACED

In the end, Sekiro beat out competition from Death Stranding, Resident Evil 2, Super Smash Bros. Ultimate, Control and The Outer Worlds to take the top prize.

What does JOE reckon for the games of the year, you ask?

As for the other major winners at Thursday night's Game of the Year Awards, well, they look like this:


popular
Met Éireann moves forward Red wind warning as public advised to stay indoors
The JOE Friday Pub Quiz: Week 180
QUIZ: Can you name all these Irish counties from only their vowels? (Part Two)
Here are the best movies on TV today
QUIZ: Do you know your dashboard warning signs?
QUIZ: Can you name all 14 landlocked counties in Ireland?
Church suspends sign of peace and empties holy water fonts due to coronavirus fears
You may also like
2 years ago
Silent Hill and Metal Gear Solid fans will be blown away by this new game trailer
2 months ago
There is a new BioShock game on the way
2 months ago
Finally, a video game that lets you play as Jesus Christ
2 months ago
There are now two new Xbox consoles set to be released in time for Christmas 2020
2 months ago
WATCH: The first trailer for the Starship Troopers video game has landed
2 months ago
It looks like that new top-secret Batman: Arkham game will be revealed very soon
Next Page