David Henrie has avoided jail time after bringing a gun into an airport.

Former Wizards of Waverly Place star David Henrie was sentenced on Monday following a gun charge that dates back to 10 September, 2018.

Henrie was charged with illegally bringing a gun into LAX airport. 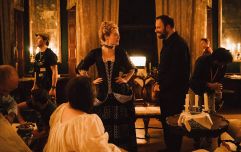 END_OF_DOCUMENT_TOKEN_TO_BE_REPLACED

TMZ have reported that he was sentenced to two years of probation, an undisclosed fine, 20 days of community service and he will have to take part in a gun safety course.

He has since released a statement apologising for the incident.

"I unintentionally bought my legally owned gun which is registered in my name to the airport.

"I am so sorry for any trouble it caused, but I am appreciative of TSA's efforts in implementing the safety laws that are in place to protect our beautiful country.

"More than anything I am humiliated and embarrassed that this even happened.

"But am thankful to the TSA, LAPD and all involved today for their kindness and their professionalism during this process."

Henrie may also be known for his role as Ted Mosby's son in How I Met Your Mother.