WATCH: Danny DeVito reveals his 3 most depraved moments from It's Always Sunny

Frank Reynolds is an awful man... a truly awful, awful man. Really, one of the worst men in the history of television.

Some of the stuff that the creators of the show have asked Danny DeVito to do makes it genuinely confusing as to why he hasn't packed up his bags and left already. 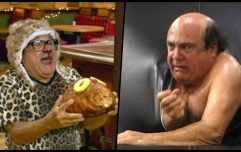 END_OF_DOCUMENT_TOKEN_TO_BE_REPLACED

But he is a vital part of one of the funniest TV shows of all time, and to be honest, the show only really picked up when DeVito joined the cast.

The man must have no shame, and we love him for it.

But he has three favourite moments that really sums up just how disgusting a character Frank Reynolds is.

Hard to disagree with any of them. And don't worry, Rum Ham got an honourable mention too.

Take a look at this interview that JOE conducted with DeVito here:

Coming out of the couch.

And in case that's still not enough for you, let's take a look at 11 other moments that Frank Reynolds was the most deplorable man on television.

popular
Human remains found in suitcases are the bodies of two children
People want "offensive" Crown Paints advert banned after attracting hundreds of complaints
Netflix has just added 23 very big movies to its library
Robert Troy apologises and submits seven amendments to correct the record
Here's how to make €9-11 on Revolut in just a few minutes
QUIZ: Can you identify the famous song from the opening line?
The prequel to one of the best twists of all time and 7 more movies & shows to watch this weekend
You may also like
9 months ago
Danny DeVito is the fifth hottest man on the planet, according to a new poll
11 months ago
There's a real Danny DeVito lookalike in Dublin and he wants the It's Always Sunny In Philadelphia gig
2 years ago
11 times Frank Reynolds was the most disgustingly hilarious man on television (NSFW)
3 years ago
Colin Farrell is totally up for starring in It's Always Sunny In Philadelphia
3 years ago
WATCH: Colin Farrell and Danny DeVito play the bodhrán and talk Irish accents
3 years ago
WATCH: Danny DeVito reveals exactly what he loves about It's Always Sunny
Next Page