Only one more month to wait...

Fans of Breaking Bad were heartbroken when the show ended in 2013.

But they only had to wait two years for their cravings to be filled.

END_OF_DOCUMENT_TOKEN_TO_BE_REPLACED

Better Call Saul came out in 2015 and fans were hooked immediately.

The Breaking Bad-sized hole in their heart was filled and all was right with the world.

And perhaps the best thing about it is that we get a more detailed look into the world that we fell in love with through a different set of eyes, but with some of the same faces still popping up now and again.

And the trailer for season four suggests that that will continue...

Walter White's ultimate foe Gustavo Fring will be back on our screens, and that is most definitely a good thing. 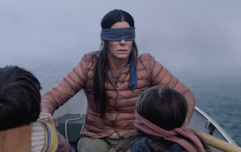 END_OF_DOCUMENT_TOKEN_TO_BE_REPLACED

We can only hope that this leads to us seeing characters like Walter White and Jesse Pinkman at some stage throughout the show, and creator Vince Gilligan has said he is open to.

Gilligan himself has said that he:"desperately wants to see both of them on Better Call Saul."

We can only hope that Bryan Cranston and Aaron Paul are on board too...

The Big Reviewski || JOE · M. Night Shyamalan, Alex Wolff & Thomasin McKenzie talk about their new creepy thriller Old
popular
The JOE Friday Pub Quiz: Week 253
The JOE Music Quiz: Week 67
QUIZ: Can you get 10/10 in this quick County Cork quiz?
One of the best comedies of the last five years is among the movies on TV tonight
Large crowds gather in Dublin to protest against vaccines and Covid certs
Draft guidelines published for the return of indoor hospitality on Monday
Horror film Old has one of the scariest scenes you’ll see this year
You may also like
4 days ago
Netflix has quietly added 11 great new movies to its library this week
5 days ago
Sexy Beasts review: Maybe I just don't understand real life anymore...
1 week ago
True crime documentary show about famous heists among the new additions to Netflix this weekend
1 week ago
Netflix to start offering video games as part of service
2 weeks ago
Netflix announces release date for Red Notice, their most expensive movie to date
1 week ago
The Simpsons 'predicted' Richard Branson's trip to space in 2014
Next Page