OFFICIAL: Here are the 10 most popular episodes of The Inbetweeners

Do you and your 'fwends' agree?

Much like Father Ted, Extras and the UK Office, one of the main reasons why The Inbetweeners is still so beloved was because Iain Morris and Damon Beesley knew exactly when to stop the show at the right moment.  Think about it. These shows rarely had a bad episode and their legacy remains intact because the overall quality will never be diminished.

On that note, it's practically impossible to choose the best episode of The Inbetweeners because you're guaranteed to laugh at every single one.

END_OF_DOCUMENT_TOKEN_TO_BE_REPLACED

10 years ago this week, Neil, Simon, Jay and Will were introduced to the world and we've all been laughing ever since. Hell, terms like 'bumder', 'bus wanker' and 'fwend' are still regularly used on a daily basis.

Hell, it's even an impossible task picking Jay's best lies - after all, he did take a pedalo to Africa, have trials with West Ham and as for Championship Manager? Completed it mate.

To mark the 10th anniversary of the show, Channel 4 have released some viewing figures for The Inbetweeners and here are the most viewed episodes along with the highest rated ones - according to IMDB.

Here's what people have voted for in terms of the best Inbetweeners episodes of all time. 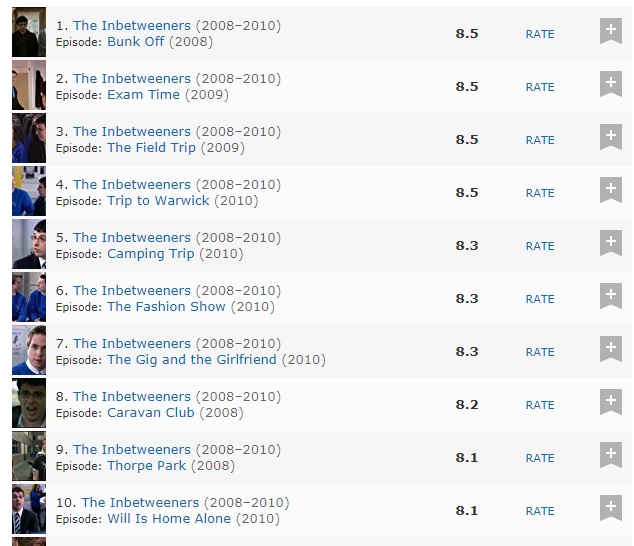 END_OF_DOCUMENT_TOKEN_TO_BE_REPLACED

Yep, it's a four-way tie at the very top but from those great episodes, we're going to go with The Field Trip as the best one. After all, where else have you seen a man punch a fish to death with his bare hands?

What do you think? Happy with the overall top 10 or is your favourite episode not in contention?

FYI, if you're an expert on The Inbetweeners, you should ace this general knowledge and quotes quiz.

House of Rugby Ireland · Quinn Roux on finding a home in Ireland and Mike McCarthy brings the absolute HEAT!
popular
The JOE Movie Quiz: Week 85
QUIZ: Name all the countries of the EU that contain 2 vowels or less
QUIZ: Can you name the Marvel Cinematic Universe film from just a single screen shot?
Recall of Pedigree dog food over safety concerns
The 50 most iconic songs of all time* have been revealed
QUIZ: Can you guess the drink from its can?
QUIZ: Can you correctly identify these European country flags?
You may also like
1 week ago
Tanya Roberts alive despite reports of her death, confirms representative
1 week ago
Netflix’s new true crime documentary examines one of the most infamous serial killers in US history
1 week ago
Former Love Island star Zara Holland charged in Barbados for breaching Covid-19 rules
1 week ago
New landmark documentary on Martin McGuinness to air on TV this week
2 weeks ago
New series of Reeling In The Years to air on RTÉ this spring
2 weeks ago
QUIZ: How well do you remember Ted's Golden Cleric speech in the Father Ted Christmas special?
Next Page