He spoke very honestly about the whole thing.

Ariana Grande came pretty damn close to breaking the internet on Saturday night when she released her song 'thank u, next', which addressed all of her ex-boyfriends by name.

Each one of her previous relationships got a mention, as she sang: "Thought I'd end up with Sean, but he wasn't a match/ Wrote some songs about Ricky, now I listen and laugh/ Even almost got married, and to Pete I'm so thankful/ Wish I could say thank you to Malcolm, cos he was an angel." 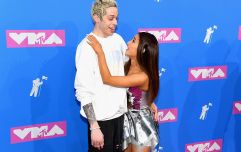 END_OF_DOCUMENT_TOKEN_TO_BE_REPLACED

The Pete she refers to is comedian Pete Davidson, to whom she was engaged with this year.

The couple broke up just under a month ago, and Davidson has clearly been quite affected by the whole thing.

He deleted all of his social media accounts, and had cancelled a number of his stand-up gigs.

On this weekend's edition of Saturday Night Live however, Davidson addressed the breakup in a very serious manner.

After a segment in which he criticised the physical appearance of everyone running in the American midterm elections, he stopped the joking and said:

"I know some of you are curious about the breakup, but the truth is that it's nobody's business. Sometimes things just don't work out, and that's okay.

"She's a wonderful, strong person, and I genuinely wish her all of the happiness in the world.

You can watch the segment in full here.

popular
One of the best Irish movies ever made has just been added to Netflix
Ireland starting to see stabilisation in indicators for Covid incidence, says CMO
New airline to provide low-cost flights from Ireland to Iceland
A woman has died and several injured after fatal Kilkenny crash
Six must-watch movies coming to Irish cinemas this December
Here are all the movies on RTÉ this Christmas
Here's the line-up for this week's episode of The Late Late Show
You may also like
2 years ago
In Dublin for Ariana Grande? Chances are you might spot her in this restaurant
2 years ago
Music critics put together a list of the 25 songs that matter the most right now
2 years ago
Ariana Grande announces third Dublin date in 2019 “due to phenomenal demand”
2 years ago
There has been a seriously strong reaction to Ariana Grande's song 'Ghostin' off her new album
2 years ago
Ariana Grande announces release date and track list for new album
2 years ago
Ariana Grande has been accused of plagiarism over her new song
Next Page