Five minutes into his new Netflix special "Humanity," Ricky Gervais starts moaning about people who moan about him.

"I was offended" he intones, mocking people who called him out for a joke he made about Caitlyn Jenner at the Golden Globes in 2016 — specifically referring to Jenner by her "deadname" Bruce.

On Humanity, Gervais doubles down on using trans people as a punchline, repeatedly winkingly referring to Caitlyn as Bruce, and imagining what it must have been like for the then-Olympic athlete to ask a doctor for a sex change. Gervais then goes on to say that if trans people can be trans, then he should be allowed to be legally recognised as a chimp. Gervais spends more than 10 minutes wreaking onstage vengeance upon the trans community for daring to find fault with his joke. But even if the jokes weren't harmful, and they are, they would still be rubbish.

END_OF_DOCUMENT_TOKEN_TO_BE_REPLACED

At one point in the special, Ricky Gervais literally says "What did the dead, dumb, blind orphan get for Christmas? Cancer." And the whole audience laughs as if it didn't hear that joke for the first time when they were 12 years old.

This, we're supposed to believe, is what passes for edgy these days. Attempts at shock value that have no shock value since nobody could possibly be shocked by them.

How could a man who clearly understood the principles beneath a character like David Brent — the embarrassment that comes with being an ageing white man who has no idea how to interact with other humans — and what made Brent so cringeworthy, mature so catastrophically? 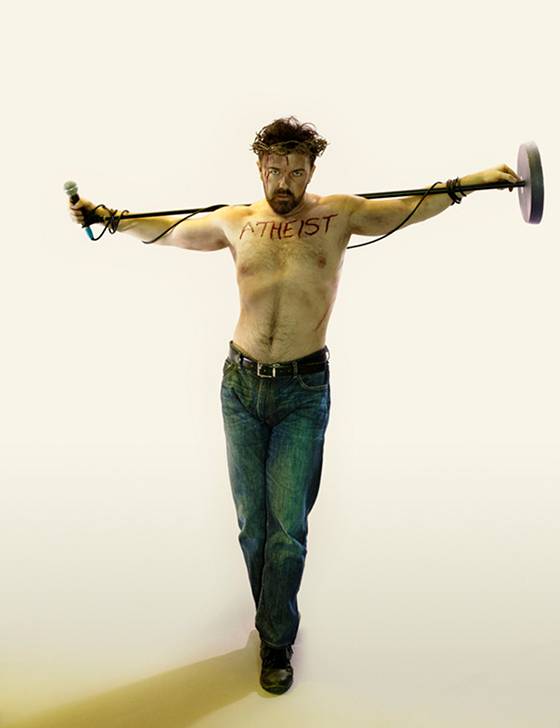 In the world of endless feedback, there has emerged a new class of comedian whose go-to genre of joke is to complain about the people who complain about them. But here's something to think about: maybe it's not that audiences are getting easier to offend... maybe comedians, softened up by years of ridiculous wealth and the trappings of their celebrity status are less able to face up to legitimate criticism? Maybe it's comedians who can no longer handle the thought that what they say will be met with consideration? Or that they need to operate within an ever-changing framework of what is funny?

How are we seriously watching yet another Netflix special where a comedian has been paid millions of dollars to stand on a stage and complain about the fact that some people sometimes give out about some of their jokes on the internet? I'm a digital journalist, people on the internet give out about what I do all the fucking time — I could talk about it for an hour, but nobody would pay €60 to come watch me and expect to split their sides laughing. And where does all of this lead, by the way? An infinite cycle where Twitter complains about comedians and comedians complain about Twitter until all we're left with to enjoy for the rest of eternity is the first eight seasons of The Simpsons?

What the hell comes next? A new season of The Office where Brent continually makes jokes about the new trans employee only for Tim and Dawn to pat him on the back and say "You're dead right David, and anybody offended by that is a fucking moron, by the way"? Sounds like comedy gold.

END_OF_DOCUMENT_TOKEN_TO_BE_REPLACED

And here's the problem when you explicitly set out to offend people — you can't. If you announce that your intent is to hurt somebody's feelings with your next joke, then the joke is going to lose almost all of its impact. It's like a comedian beginning each routine with "Well this next one ought to make you laugh."

But here's the thing, seriously, the main thing. Being offended is not the problem. The issue is never offence. It wasn't when Eddie Murphy used to do lengthy routines calling gay people faggots, it wasn't when Bernard Manning used to make jokes dehumanising ethnic minorities, and it isn't now that Ricky Gervais is going hard on trans people who try to stand up for themselves. The issue is never offence. Offending somebody is not the crime.

The crime is using your unthinkably oversized platform to contribute to a culture where gay people, or ethnic minorities, or trans people, are already persecuted and endangered by things that are much scarier than a millionaire with a megaphone.

Recent statistics revealed that no fewer than 40% of trans people in Ireland had attempted suicide. What does that tell you about the world they live in? Surely it tells you that they've got concerns that go far beyond Ricky Gervais and Dave Chappelle.

These lads would like to believe that they, the celeb, the star, are at the heart of the discussion — when in actual fact they're just another brick in the wall. Another nail in the coffin. Another person making the same bigoted taunts you could hear from 20-odd men down the pub — except maybe not, because those men live in the real world, and every day face up more and more to the reality that women, that gay people, that black people, that trans people do not exist solely as a punchline for the jokes enjoyed by white men. "If that chap can be a woman then I can be a chimp" is exactly the kind of biting wit you'd expect from the uncle who everybody tries to avoid at family gatherings.

END_OF_DOCUMENT_TOKEN_TO_BE_REPLACED

It is almost mind-boggling how comedians like Gervais can be so sensitive and insensitive all at once. How is it that they are so unable to understand that other people's feelings can be hurt just the same way theirs are? And how is it that they can't see the imbalance between a celebrity who lives their whole life on a platform — and an upset trans Office fan with a Twitter following of 120 friends just struggling to have their side of the story heard?

And maybe the most frustrating element of all this is that Ricky Gervais definitely used to understand. The Office and Extras were definitely poking fun at the white guy who was continually making a fool of himself whenever he came into contact with a black person or a gay person, right?

When David Brent tried to tell a racist joke to the Swindon lot, we weren't supposed to be on his side when he got in trouble — we were supposed to cringe and think "What an idiot". When Gervais scripted Keith Chegwin on Extras to ask if the BBC was still "run by Jews and queers," we presumably weren't supposed to be cheering for that point of view. We were laughing at it. Its outdatedness. Its absurdity. Its stupidity. All words that could now be used to describe major segments of Gervais's own stand-up set.

popular
One of Keanu Reeves' best movies has just been added to Netflix
"Clear as daylight" that unvaccinated people are a risk to themselves and others - Taoiseach
The JOE Movie Quiz: Week 131
Met Éireann issues Orange weather warnings for five counties ahead of Storm Barra
QUIZ: Can you get full marks in this General Knowledge Quiz?
QUIZ: Do you reckon you can get 15/15 in this General Knowledge Quiz
A terrific crime thriller is among the movies on TV tonight
You may also like
1 week ago
Two big new Netflix shows and four more trailers you might have missed this week
1 week ago
The full list of all the new shows and movies coming to Netflix in December
1 week ago
New Netflix series Hellbound has knocked Squid Game off the top spot
1 week ago
Kevin Spacey ordered to pay $31 million for breaching House of Cards deal
2 weeks ago
Netflix has quietly added 10 big new movies to its library
2 weeks ago
The "next Game of Thrones" and 7 more movies and shows to watch this week
Next Page