Tom Hardy will feature in the Star Wars Episode VIII, according to reports

We here at JOE love Tom Hardy. We also love Star Wars. So we love this story.

Star Wars news site Making Star Wars is reporting that Mad Max himself will be popping up in Star Wars Episode VIII to play a Stormtrooper who has history with John Boyega's character Finn.

According to reports, Hardy's Stormtrooper is going bump into Finn during the next adventure and make a few jokes about how he's working as a Resistance spy. 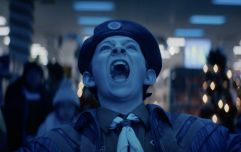 END_OF_DOCUMENT_TOKEN_TO_BE_REPLACED

The news would be a nice continuation from Episode VII's casting of well known celebrity actors in cameos.

<Mild spoilers for Star Wars Episode VII - The film you should have probably watched by now because it's one of the highest earning films of all time, but we're still nice folks who respect internet etiquette.>

Remember Unkar Plutt, the junker who tried stiffing Rey back on Tatooine?

That was yer boi Simon Pegg.

This burly Stormtrooper who ended up getting the Jedi Mind Tricked by Rey?

That was Daniel Craig.

All we're saying is, Tom Hardy starring in Star Wars is entirely possible.

This story originally appeared on JOE.co.uk

popular
Gardaí warning people not to make unnecessary journeys in anticipation of Storm Barra
Carlow woman banned from keeping animals for life after starving dogs to death
Landscapers is the ultimate true-crime murder mystery show
"Danger to life" risk with Storm Barra "weather bomb", warns Met Éireann
Man dies after being attacked by newly calved cow in Mayo
The JOE Movie Quiz: Week 131
An underseen Keanu Reeves adventure is among the movies on TV tonight
You may also like
1 month ago
Alec Baldwin was told prop gun was safe before fatal shooting
2 months ago
"No one is safe" – Johnny Depp blasts "cancel culture" as he receives award
2 months ago
Daniel Craig says goodbye to James Bond in emotional farewell speech
2 months ago
Luther to finally settle the score in long-awaited standalone Netflix film
3 months ago
QUIZ: Can you name the Marvel Cinematic Universe film from just a single screen shot?
4 days ago
Here's the line-up for this week's episode of The Late Late Show
Next Page