Starting on August 31, eFlow motorists using certain Irish roads will have to stop and pay with cash or card at the toll booths.

Drivers who use the M1 near Drogheda, the M7/M8 south of Portlaoise and the N25 at Waterford will no longer have their tags recognised and the barriers will not automatically lift for them. Up to 80,000 motorists are expected to be affected.

According to UTV, the change is as a result of a dispute between Celtic Roads Group and eFlow. 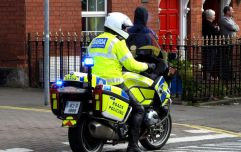 END_OF_DOCUMENT_TOKEN_TO_BE_REPLACED

As such, it is recommended that drivers register with a new tag provider before the August 31 cut-off date. A list of tag companies can be found here.

Both companies have asserted that they are working to resolve the dispute as quickly as possible.

House of Rugby Ireland · Ireland's feel-good win, Casey's initiation song, scrapping Sexton and Scott Williams interview
popular
The 50 most iconic songs of all time* have been revealed
Eoghan McDermott to leave RTÉ after six years (Report)
QUIZ: Can you answer all the £1 million questions from Who Wants to be a Millionaire?
People think they've figured out the ranking of the viewers on your Instagram Stories
Someone in Ireland is €500,000 richer following Tuesday's EuroMillions draw
PICS: The man with the biggest penis in the world has one unbelievable problem with it
EA Sports bans Irish FIFA player who racially abused Ian Wright for life
You may also like
9 months ago
Gardaí announce major roads operation targeting four 'lifesaver' offences over Bank Holiday weekend
9 months ago
Gardaí stop driver with over 36 years of driving bans
1 year ago
'Tailgating' revealed as most annoying driving habit amongst Irish motorists
1 year ago
UK-registered vehicles will need a GB sticker when driving in Republic Of Ireland after Brexit
1 year ago
Man arrested on suspicion of drink-driving with infant unrestrained in front seat
1 year ago
PIC: Driver stopped going over twice the speed limit in Longford
Next Page