Pictures of the fake posters were doing the rounds on social media over the weekend.

The LoveBoth campaign has confirmed that the 'Women Can't Be Trusted' posters erected in Dublin are in fact fake.

These posters, which were shared across social media platforms over the weekend, were printed with the unauthorised use of the groups logo and have been described as an act of "vandalism". 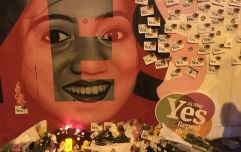 END_OF_DOCUMENT_TOKEN_TO_BE_REPLACED

In a statement, the campaign's spokesperson Eilís Mulroy labelled it "a pathetic attempt to smear those working to inform the public that this Government has planned to introduce extreme abortion on demand into Ireland if the Eight Amendement is removed."

She went on to say: "We deplore the fact that certain groups and individuals have decided to engage in dirty tactics and attack the legitimate democratic expression of those who wish to protect women and unborn children from abortion on demand."

In order "to avoid confusion" among its followers, LoveBoth responded by sharing images of their actual posters.

This is the latest incident in the ongoing issue of poster vandalism by both those on the Yes and No sides of the Eight Amendment referendum.

On Saturday night (28 April), Dublin Fire Brigade were called to extinguish campaign posters which had been set ablaze in the city centre. 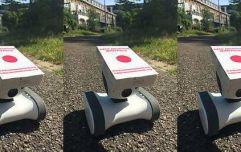 END_OF_DOCUMENT_TOKEN_TO_BE_REPLACED

On 17 April, video footage surfaced online of a man in Limerick tearing down multiple posters belonging to the organisation Rosa, which state 'Stop Shaming Women'.

Commenting on the incident to JOE, Rita Harrold of Rosa said: "We are used to these tactics from anti-abortion campaigners.

"They try to silence women and minimise our voice in society. This is still happening.

"We know that the vast majority don't support those values, we know they trust women in society."

Adding that each poster costs €6, she said: "Also the effort of the campaigners who volunteer to put them up is of equal importance to us."

popular
More counties issued with weather warnings as Storm Barra hits Ireland
Woman in her 30s injured after falling from balcony in Cork city
Woman in her 90s dies following road crash in Clare
Amazon Prime Video has quietly added 8 big new movies to its library
Schools affected by Storm Barra expected to reopen tomorrow, says Minister
An underseen Keanu Reeves adventure is among the movies on TV tonight
Thousands of homes without power due to Storm Barra
You may also like
3 years ago
10 things British journalists covering Irish news stories need to know
3 years ago
British journalist attempts to equate Brexit to Eighth Referendum, and the public reaction was intense
3 years ago
There was a fantasically Irish reaction to the RTÉ exit poll 69% Yes vote
3 years ago
Exit poll revealed during The Late Late Show showed a 69.4% Yes vote on Eighth Referendum
3 years ago
Irish Times exit poll reveals a potential landslide decision in favour of repealing Eighth Amendment
3 years ago
Why the Eighth Referendum exit polls won't tell the whole story
Next Page