A security guard at a Belgian nuclear power plant has been found dead with his work pass stolen.

The man was killed on Thursday evening while walking his dog in the city of Charleroi, with the news only revealed on Saturday morning by the Derniere Heure newspaper.

His pass was quickly cancelled, amid fears that bombers involved in last week's terror attacks in Brussels were looking to build a radioactive dirty bomb. 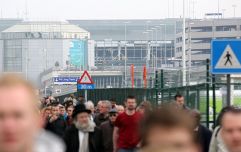 END_OF_DOCUMENT_TOKEN_TO_BE_REPLACED

According to the Telegraph, investigators are looking into the possibility that the man was killed for his pass and that terrorists linked to the Islamic State were looking to infiltrate the country's nuclear power stations.

Intelligence warnings led to 11 workers at power plants having their credentials revoked, while brothers Ibrahim and Khalid El-Bakraoui - who are believed to have blown themselves up at Zaventem Airport and a Brussels Metro station - have been linked with a plot to make bombs that would contaminate a crowded area with radioactive material.

A French intelligence source also told the Telegraph on Saturday that security measures have been stepped up at France’s many nuclear power plants.

The Big Reviewski || JOE · The Big Reviewski with Ray Liotta, Goodfellas facts & Tom Hanks making us cry
popular
EU lorry drivers vow not to help UK get “out of the s**t they created themselves”
Netflix has just added arguably the very worst movie of the last decade
Gardaí appealing for witnesses after body of man in his 20s found in Dublin's Grand Canal
Four major employers join forces to create Ireland’s first remote working alliance
Up to 90% of petrol stations in the UK have run dry
Here’s what graduates from Irish colleges can expect to earn in the workplace
An Oscar-worthy Margot Robbie performance is among the movies on TV tonight
You may also like
5 years ago
VIDEO: Belgians in Dublin get together to remember the victims of last week's bombings
5 years ago
Dublin Airport will now be policed by armed guards
5 years ago
Belgian police find a suicide note believed to be written by one of the Brussels bombers
5 years ago
The FAI have made a statement regarding security arrangements following the Brussels attacks
5 years ago
COMMENT: Brussels and the morbid race to spin a tragedy
5 years ago
These are the names of the suspects behind yesterday's attack in Brussels Airport
Next Page