Government to spend an estimated €1.2 million on Pope visit to Dublin this August

The amount is set to cover the two-day visit.

It was revealed a few weeks ago that the Holy Father will take part in the ‘Festival of Families’ at Croke Park on Saturday 25 August and will be the chief celebrant at Holy Mass in the Phoenix Park on Sunday 26 August.

Today, it is being reported that the Government has estimated €1.2 million to spend on temporary public address systems, CCTV cameras and radio communications for the visit. 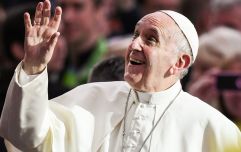 END_OF_DOCUMENT_TOKEN_TO_BE_REPLACED

The Irish Times have stated that in the tender documents for these temporary additions, the Office of Government Procurement is seeking tenders for “a managed solution” for the papal visit, which will include CCTV systems, a secure communications network and event-control services, adding "The commissioners for public works in Ireland is seeking to procure the provision of a managed solution for papal visit 2018 at locations including Dublin Castle and Phoenix Park."

Over the weekend, the Archbishop of Dublin, Diarmuid Martin, spoke about looking forward to the visit, while describing The Pope as "a complex figure, not all smiles. He's determined, he knows when people are not being true to him, not being loyal to him. He's nobody's fool. When he wants to do something, he'll do it."

Meanwhile, those who are hoping to attend will want to read up on all the necessary details in securing a ticket.

popular
James May reportedly hospitalised after crashing into wall at 75mph filming new show
Disney+ has just added 10 big movies to its library
Netflix has just added an incredibly tense 97-minute thriller
QUIZ: You'll need to be razor-sharp to get 100% in this General Knowledge Quiz
An exciting Irish crime thriller is among the movies on TV tonight
The JOE Music Quiz: Week 117
The JOE Friday Pub Quiz: Week 307
You may also like
3 years ago
More people watched Daniel and Majella on Room to Improve than both All-Ireland Finals last year
3 years ago
Tuam Survivors Network condemn Katherine Zappone for 'publicity stunt'
3 years ago
Papal visit shows that 'Catholic Ireland' is a thing of the past
3 years ago
Figures reveal how many people watched Pope Francis in Ireland on RTÉ
3 years ago
The Pope's Skoda that he used in Dublin will be donated to help the homeless
3 years ago
Here's the full transcript of what the Pope said about the Tuam memo he received
Next Page