What a way to start off your year.

Season 12 of It's Always Sunny in Philadelphia ended on a bit of a strange note.

Dennis announced to the gang that he had a son, and he was getting a bit tired of all of the gang's antics, and he just upped and left. 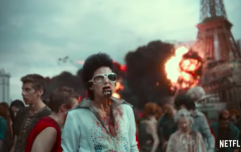 END_OF_DOCUMENT_TOKEN_TO_BE_REPLACED

So people really have no idea what to expect from the new season.

Will Dennis even be involved? How will the rest of the gang react? Will they miss him? Will their lives be better off without him?

It's probably the first time the show has ever ended on a proper cliffhanger, and we're loving it.

What's even better is that whatever questions you may have about the show, will be answered on Sunday when it lands on Netflix.

And just because we're so excited to see some new episodes of this classic comedy, why not enjoy all of Frank Reynolds' most disgusting moments throughout the show...

House of Rugby Ireland · Murray & Sexton debate, France's Covid hell and James Tracy interview
popular
The JOE Friday Pub Quiz: Week 232
Scarlett Moffatt discovers ‘30% rain’ on weather app doesn’t mean chance of rain
Irish cinema named one of the 50 most beautiful cinemas in the world
QUIZ: Can you name all of these characters from The Rugrats?
QUIZ: Can you identify these world cities on a map?
Gardai prepare for massive crowd at Dublin protest march
These are the free subscription games coming to PlayStation and Xbox in March
You may also like
2 days ago
The full list of all the new shows and movies coming to Netflix in March
1 week ago
20 of the best war movies you can watch at home right now
1 week ago
QUIZ: How well do you remember Orange Is The New Black?
1 week ago
Tom Hardy to star in Netflix's new action thriller from the director of The Raid
1 week ago
New Biggie documentary coming to Netflix in March
1 week ago
Season 3 of Drive to Survive coming to Netflix next month
Next Page