Off the back of this first trailer, we're absolutely hooked.

Okay, let us take a look at who is involved in The Undoing. 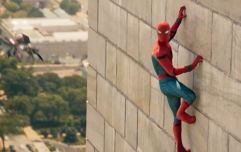 END_OF_DOCUMENT_TOKEN_TO_BE_REPLACED

And then you've got HBO's own official description of the show, which will set off those parts of your brain that immediately want to untangle a mystery:

"Nicole Kidman and Hugh Grant star as Grace and Jonathan Fraser, who are living the only lives they ever wanted for themselves. Overnight a chasm opens in their lives: a violent death and a chain of terrible revelations. Left behind in the wake of a spreading and very public disaster and horrified by the ways in which she has failed to heed her own advice, Grace must dismantle one life and create another for her and her family."

Kidman reuniting with her Big Little Lies producer, and bringing along a newly-career-revitalised Hugh Grant (who was also a highlight in recent outing The Gentlemen), and we are fully on board for a new brain-twisting mystery.

The Undoing will debut on HBO (in the States) and Sky Atlantic/Now TV (in Ireland) in May.

House of Rugby Ireland · Murray & Sexton debate, France's Covid hell and James Tracy interview
popular
QUIZ: Can you identify these world cities on a map?
TOWIE star Mark Wright is officially the worst player on FIFA 21
Dublin beauty salon owner arrested after reopening for second consecutive day
Galway Lotto players urged to check their tickets for unclaimed December prize
The full list of all the new shows and movies coming to Netflix in March
10 years on, the ultimate example of Great Trailer Terrible Movie has yet to be topped
Johnson & Johnson one-shot vaccine safe and effective, FDA finds
You may also like
1 day ago
Greatest Showman director working on Robbie Williams biopic
1 day ago
Juventus the next team to get Amazon Prime documentary treatment
1 day ago
Here are the best movies on TV this evening
1 day ago
The new voice actor for Dr Hibbert on The Simpsons has been announced
1 day ago
Here are our picks of the new and classic shows coming to Star on Disney+
1 day ago
Star launches on Disney+ today, here is the very first thing you need to do
Next Page