Line of Duty could be back sooner than expected

We need our fix of bent coppers.

After a two year wait between season 4 and season 5, Line of Duty fans have become accustomed to having patience with the BBC copper-crime drama.

The show has continually gathered steam, and its fandom seemed to reach its peak in 2019 after the series was uploaded to Netflix.

Now, creator of the show Jed Mercurio has said the sixth season of the show could drop in 2020, having only finished in May of this year.

"I would hope it's sometime in 2020, next year. But that's not something that we're able to confirm," he told Radio Times.

As for getting started on production, he said: "That's something that we have at the planning stage, so we are working towards a date. We can't confirm everything until things are in place." 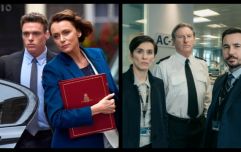 END_OF_DOCUMENT_TOKEN_TO_BE_REPLACED

Last time around, Mercurio took time off the crime drama to work on The Bodyguard, starring Richard Madden, but it doesn't seem like there are any other projects to get in the way this time.

Typically, seasons of the show have started in March, so if production hasn't begun but 2020 is the aim, we could be looking at season dropping later in the year. All we know is that we're ready for it.


popular
Met Éireann state that three days of snow, hail, and sleet is coming for parts of Ireland
The JOE Friday Pub Quiz: Week 175
Viewers raise over €300,000 after Munster's Billy Holland and wife Lanlih's emotional Late Late Show appearance
The shortlist for the best breakfasts in Ireland has been revealed
How to manage a panic attack, according to the experts
QUIZ: We give you the movie title, you tell us the dog breed in it
THAT Leo Varadkar Hot Press interview revisited, 10 years on
You may also like
1 month ago
The producers of Line of Duty and Bodyguard have a new thriller on the way
2 months ago
"The most enigmatic adversary AC-12 have ever faced" to be introduced in Season 6 of Line of Duty
2 months ago
Work on Season 6 of Line of Duty has already begun
2 months ago
Line of Duty and Bodyguard creator is producing a new crime drama in Northern Ireland
4 months ago
QUIZ: How many of these Line of Duty characters can you name?
4 months ago
Line of Duty's Martin Compston and Peaky Blinders' Sophie Rundle lead cast of BBC drama The Nest
Next Page