Including a remake of a modern classic and season two of a hidden gem...

On top of regularly topping up their library with the addition of some very big movies - like the 27 they added just this week - Amazon Prime Video has just revealed their impressive line-up of original new shows and movies coming to their service throughout April.

END_OF_DOCUMENT_TOKEN_TO_BE_REPLACED

As we previously reported, Hacks is one of the best new comedies to arrive from HBO in years, and Prime Video will be streaming it for Irish audiences. The multi-award winning series tells the story of two comedians - played by Jean Smart and Hannah Einbinder - at two very different points in their careers, who find a way to help each other out when they both face potentially career-ending hurdles.

All episodes will be available to watch from Friday, 1 April.

END_OF_DOCUMENT_TOKEN_TO_BE_REPLACED

ALL THE OLD KNIVES

Chris Pine, Thandiwe Newton, Laurence Fishburne and Jonathan Pryce star in this tense espionage thriller. When the CIA discover that a mole within their organisation revealed information that led to the deaths of over 100 people, an agent (Pine) is sent on a global journey to discover their identity.

The movie is available from Friday, 8 April.

END_OF_DOCUMENT_TOKEN_TO_BE_REPLACED

Josh Brolin headlines this mysterious western thriller, playing the head of a family of ranchers who are still emotionally recovering from the disappearance of a family member. Things take a turn for the worse when an unexplainable black void suddenly appears on the edge of their property...

Two episodes will be available every week for four weeks, kicking off from Friday, 15 April.

The English-language remake of the much-loved French show Call My Agent, with the talent agency relocated to London. The group of agents are constantly scrambling to keep their A-list clients as happy as possible, with cameo appearances said to include Helena Bonham Carter, Olivia Williams, David Oyelowo, Jessica Oyelowo, Dominic West, Phoebe Dynevor and Kelly MacDonald.

The show will be available to watch from Thursday, 28 April. 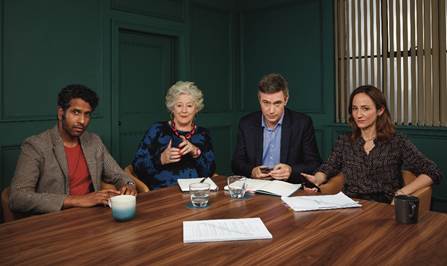 The first season was one of the best hidden gems of recent years, so if you haven't watched it yet, we highly recommend you catch up on it ASAP before the arrival of the new season. Rosa Salazar and Bob Odenkirk return as daughter and (deceased?) father in this time-bending sci-fi emotional rollercoaster.

The new season will be available to watch from Friday, 29 April.

popular
Bus Éireann’s service from Dublin to London will restart this week
Gardaí unveil new Armed Support Unit vehicles to replace older models
One in two young people likely to not own a home by the time they retire
Rockstar Games reportedly shelving remasters of two of the best games ever made
Conservative Party vice chairman resigns live on TV as Johnson administration thrown into turmoil
One of the greatest crime movies of all time could be getting a sequel
An action-packed thriller is among the movies on TV tonight
You may also like
4 days ago
All of the new releases coming to Netflix, Prime Video, Disney+ and cinemas in July
5 days ago
One of the best sports movies of recent years is now available to stream at home
6 days ago
"The Raid meets Tangled" plus 4 more movies & shows to watch this weekend
6 days ago
Netflix reveals full line-up of new shows and movies arriving in July
1 week ago
The 10 best TV shows of 2022 so far
1 week ago
Amazon Prime Video has just quietly added 15 big movies to its library
Next Page